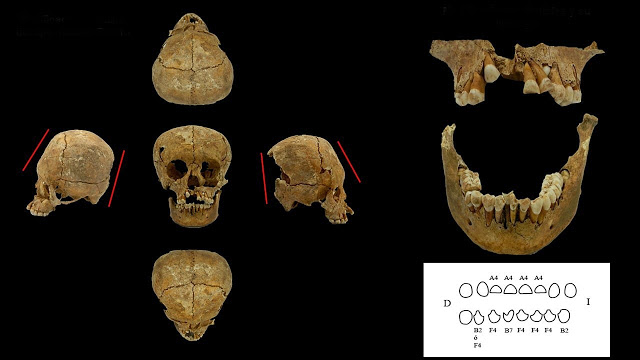 Mexico analyzes bones and objects from 1,400 years ago found in Michoacán

The skeletal remains of a woman and 19,428 associated objects, found in 2011 in the archaeological zone of Tingambato, in the western state of Michoacán, were analyzed by researchers from the National Institute of Anthropology and History (INAH), who pointed out that its antiquity dates back to 630 AD.

In a statement, it was explained that the skeletal remains of the woman were found inside a burial chamber “built five meters deep, with strong stone walls and a vaulted ceiling of slabs in a spiral direction, where she was buried with a rich trousseau made up of 19,428 shell and lapidary objects “.

The archaeologist José Luis Punzo Díaz, a researcher at the INAH Michoacán Center, indicated that the results revealed the significance of this burial and of the inhumed character, placing it “as one of the most important archaeology in western Mexico, particularly Michoacán.”

Osteological and ancient DNA analysis confirmed that the skeletal remains deposited in Tomb II of the aforementioned archaeological zone belonged to a young woman between 16 and 19 years old and its antiquity dates back to 630 AD.

This according to the radiocarbon collagen analysis done at the National Autonomous University of Mexico (UNAM), whose data coincides with the stage of greatest growth of Tingambato, from 550 to 850 AD, said Alejandro Valdés Herrera, a member of the research project.

Due to the fragmentation and poor preservation conditions of the skull, a careful reconstruction was made in the Laboratory of Physical Anthropology of the INAH-Michoacán Center, where it was discovered that it presented cephalic deformation, as well as dental modification work.

“Although these modifications were recurrent in his time, they are associated with certain groups in society, which leads us to think that he was part of the local elite,” explained Valdés Herrera.

While when analyzing his teeth, they observed that the modifications were not worn or showed evidence of use, so they could have been carried out at a time close to his death.

The studies of the materials, which began in 2016, also determined various paleopathologies, which indicate that he suffered periods of illness such as fever and a mild degree of malnutrition, although they do not appear to be the cause of death, which is still unknown.

When analyzing 18,601 elements made with seashells, it was determined that most of the beads and earrings are of the Spondylus princeps species, from the Pacific, peculiar for its orange hue, which was highly appreciated by ancient cultures.

About the 827 lapidary elements, the specialists highlighted that most of the greenstone beads correspond to a mineral called amazonite, whose origin is not yet specified, but important veins are known in the state of Chihuahua.

According to studies, Tingambato was a privileged site due to its location, at the entrance to Tierra Caliente and the cold mountain range of Michoacán, which arose in the year 0 and had a constant occupation until 900 AD.