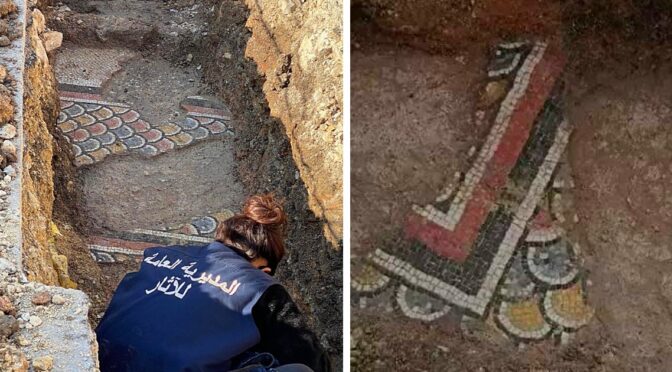 Mosaics From The Roman Era Were Just Uncovered In Lebanon

Arab News reports that a six-foot section of Roman mosaic dated to between 60 B.C. and A.D. 300 was uncovered in the city of Baalbek, which is located in eastern Lebanon, during work to install sewage pipes.

The two-meter-long artefact was uncovered under a municipality building by a team of workers from the Lebanese Organization for Studies and Training who were carrying out excavations to extend a drainage network.

A technical team from the Directorate General of Antiquities in Baalbek protected the coloured mosaic with sand and special geotextile covering.

City Mayor Fouad Blog said: “Baalbek is one of the most important cities in Lebanon and, indeed, the world because of its archaeological monuments and riches dating back to the Phoenician, Roman, Greek, Byzantine, Arabic and Islamic eras.”

He called on state authorities “to give Baalbek more care and attention, and to meet our vision with a strategic plan to search for lost treasures, and highlight the cultural, human and civilizational value of the city.”

Baalbek was famous throughout the ages due to its location at the intersection of several major trading routes.

The Romans built huge temples, the ruins of which are still perched on the edge of the city after an earthquake around 600 A.D. destroyed many landmarks. The Temple of Jupiter, one of the most imposing Roman sites, has only six of its original 54 columns remaining.

Dr Jaafar Fadlallah, professor of archaeology, told Arab News: “The Lebanese should not be surprised by the antiquities that can be found in Baalbek.

The extent of the ancient city is not known yet. No one knows where the graveyards of that era are located.”

He added: “The coloured mosaic found on Tuesday indicates that the place was a huge hall within a Roman palace. Roman Baalbek was inhabited by many emperors, and it is rich with the distinctive architecture that surrounded the ancient temples.”

Fadlallah said that during the second half of the 20th century, the Department of Antiquities failed to stop people from building on land that could be rich in antiquities.

During the civil war in the 1970s, people built on archaeological sites in violation of the law. Any excavation work “could reveal buried monuments,” he added.