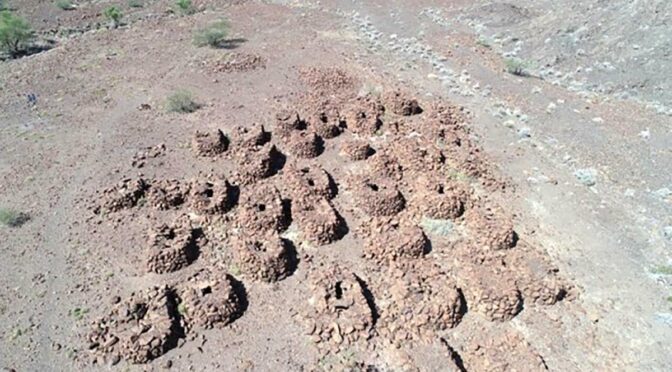 In collaboration with Germany’s Heidelberg University, the Oman Ministry of Heritage and Culture founded a project to study the Iron Age settlements in North Al Sharqiyah. The ministry has said that the tombs are “very well maintained” and cover an area of 50-80 square metre area.

These tombstones are about 700 meters from a settlement that the team believes to have been the home of people who worked in copper mining since the early Iron Age.

Copper mining was thought to take place during the Iron Age and continued until the early Islamic era.

“It is the most preserved sites of its components, where stone buildings and tombs resembling huts are retained by nature for more than 3,000 years, and reflect the method of burial,” the Ministry of Heritage and Culture said.

“It features the social status of the deceased through the length of the tomb and archaeological artefacts buried with him.”

Al Sharqiyah site is one of many archaeological finds discovered in Oman over the past decade. Many were discovered by a team from the archaeology department at Sultan Qaboos University, which works with the Ministry of Heritage and Culture to find, protect and preserve sites of interest.

Oman’s ancient sites have also been recognised by the UN. In 1988, Bat, Al Khutm and Al Ayn were certified as World Heritage Sites.

The three ancient settlements in Al Dhahira Governorate of north-west Oman are the most complete of their kind from the Iron Age.

In January 2018, the largest trove of Iron Age weapons in the region was discovered at Mudhmar East. It contained more than 3,000 arrows, daggers and axes.