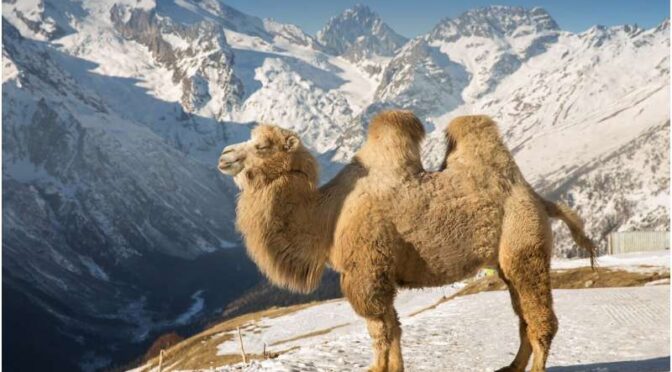 Palaeolithic People in Mongolia May Have Consumed Giant Camel

A species of giant two-humped camel, Camelus knoblochi, is known to have lived for approximately a quarter of a million years in Central Asia. A new study in Frontiers in Earth Science shows that C. knoblochi’s last refuge was in Mongolia until approximately 27,000 years ago.

In Mongolia, the last of the species coexisted with anatomically modern humans and maybe the extinct Neanderthals or Denisovans. While the main cause of C. knoblochi’s extinction seems to have been climate change, hunting by archaic humans may also have played a role.

“Here we show that the extinct camel, Camelus knoblochi, persisted in Mongolia until climatic and environmental changes nudged it into extinction about 27,000 years ago,” said Dr. John W Olsen, Regents’ professor emeritus at the School of Anthropology of the University of Arizona, Tucson, US.

The new results suggest that C. knoblochi coexisted with C. ferus during the late Pleistocene in Mongolia, so that between-species competition may have been the third cause of C. knoblochi’s extinction. Standing nearly three meters tall and weighing more than a ton, C. knoblochi would have dwarfed C. ferus.

The precise taxonomic relationships between these two species, other extinct Camelus, and the ancient Paracamelus aren’t yet resolved.

Steppe specialists are driven into extinction by desertification

The new study describes five C. knoblochi leg and foot bones found in Tsagaan Agui Cave in 2021, and one from Tugrug Shireet in today’s Gobi Desert of southern Mongolia. They were found in association with bones of wolves, cave hyenas, rhinoceroses, horses, wild donkeys, ibexes, wild sheep, and Mongolian gazelles. This assemblage indicates that C. knoblochi lived in montane and lowland steppe environments, less dry habitats than those of its modern relatives.

In the late Pleistocene, much of Mongolia’s environment became drier and changed from steppe to dry steppe and finally desert.

“Apparently, C. knoblochi was poorly adapted to desert biomes, primarily because such landscapes could not support such large animals, but perhaps there were other reasons as well, related to the availability of fresh water and the ability of camels to store water within the body, poorly adapted mechanisms of thermoregulation, and competition from other members of the faunal community occupying the same trophic niche,” wrote the authors.

Towards the end, the last of the species may have lingered, at least seasonally, in the milder forest-steppe—grassland interspersed with woodland—further north in neighbouring Siberia. But this habitat probably wasn’t ideal either, which could have sounded the death knell for C. knoblochi. The world would not see giant camels again.

Preyed upon or scavenged by humans

What were the relations between archaic humans and C. knoblochi?

Corresponding author Dr. Arina M Khatsenovich, senior researcher at the Russian Academy of Sciences’ Institute of Archeology and Ethnography in Novosibirsk, Russia, said, “A C. knoblochi metacarpal bone from Tsagaan Agui Cave, dated to between 59,000 and 44,000 years ago, exhibits traces of both butchery by humans and hyenas gnawing on it. This suggests that C. knoblochi was a species that Late Pleistocene humans in Mongolia could hunt or scavenge.”

“We don’t yet have sufficient material evidence regarding the interaction between humans and C. ferus in the Late Pleistocene, but it likely did not differ from human relationships with C. knoblochi—as prey, but not a target for domestication.”

First author Dr. Alexey Klementiev, a paleobiologist with the Russian Academy of Sciences’ Siberian Branch, said, “We conclude that C. knoblochi became extinct in Mongolia and in Asia, generally, by the end of Marine Isotope Stage 3 (roughly 27,000 years ago) as a result of climate changes that provoked degradation of the steppe ecosystem and intensified the process of aridification.”