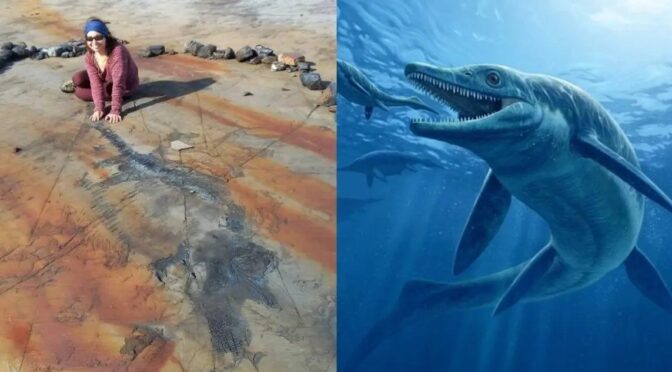 Archaeologists in Chile have unearthed the fossilized remains of a 13ft-long pregnant ichthyosaur from a melting glacier -marking the first time a complete ichthyosaur has been found in the country.

The 139-million-year-old fossil was carefully collected by helicopter following an expedition in March and April this year by the University of Magallanes (UMAG) in the Tyndall Glacier area of Chilean Patagonia.

Named ‘Fiona’ by scientists at the University of Manchester, the 139-million-year-old fossil died when she was pregnant and still had several embryos in her belly.

Ichthyosaurs were marine reptiles that lived in the age of dinosaurs, and Fiona is the only pregnant female of Valanginian-Hauterivian age – between 129 and 139 million years old from the Early Cretaceous period – to be excavated on the entire planet.

Dr. Dean Lomax, a palaeontologist working on the study, said: ‘The fact that these incredible ichthyosaurs are so well preserved in an extreme environment, revealed by a retreating glacier, is unlike anywhere else in the world.

‘The considerable number of ichthyosaurs found in the area, including complete skeletons of adults, juveniles, and newborns provides a unique window into the past.’

Now, researchers are keen to find out what information they can gather from the incredibly rare find.

Fiona was first found in 2009 by Dr. Judith Pardo-Pérez, a Magellanic palaeontologist and UMAG researcher.

Collecting this specimen was not easy, as the glacier is within a 10-hour hike or horseback ride. The expedition lasted 31 days and was described by the researchers as an ‘almost titanic challenge.’

‘At four meters long, complete, and with embryos in gestation, the excavation will help to provide information on its species, on the palaeobiology of embryonic development, and on a disease that affected it during its lifetime,’ said Dr. Judith Pardo-Perez, who led the study.

Alongside Fiona, 23 other new specimens were discovered during the expedition, making the Tyndall Glacier the most abundant ichthyosaur graveyard in the world, according to the team.

Alongside Fiona, 23 other new specimens were discovered during the expedition, making the Tyndall Glacier the most abundant ichthyosaur graveyard in the world, according to the team.

Fiona will now be prepared in the palaeontology laboratory of the Río Seco Natural History Museum in Punta Arenas, where it will be temporarily stored for later exhibition.