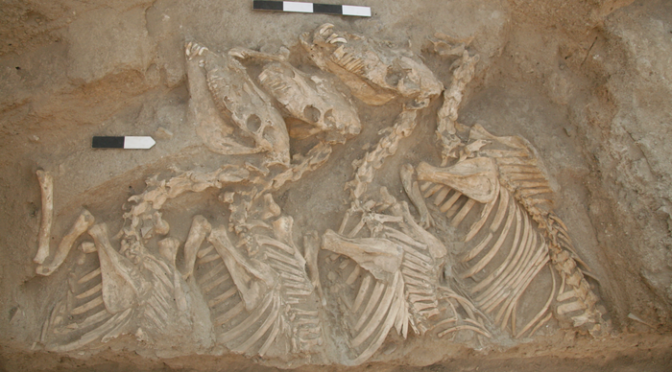 The kungas of Syro-Mesopotamia were ancient equines that roamed the region 4,500 years ago. Arriving long before domesticated horses did, the stocky horse-like animals were highly valued and used for pulling four-wheeled wagons into battle, reports James Gorman for the New York Times.

Having been depicted in mosaics and their value recorded in cuneiform on clay tablets, researchers suspected the prestigious kunga was a type of hybrid donkey. Still, their proper classification in the animal kingdom remained unknown until now.

A genetic analysis using ancient skeletal remains, genetic material from the last surviving Syrian wild ass, and an investigation of the evolutionary history of the genus Equus revealed that the kunga was the cross of a female donkey (Equus Africanus asinus) and a male Syrian wild ass (Equus hemionus hemippus), reports Isaac Schultz for Gizmodo.

The find is the earliest human-made hybrid documented in the archaeological record and suggests that kungas were bred to be faster and more robust than donkeys and more manageable than wild asses, which are also called onagers or hemiones, per a French National Centre for Scientific Research statement. Scientists published details of the genetic analysis this month in Science Advances.

Dozens of equine skeletons that did not match the features of any known equine species were found buried next to royals. Study co-author Jill Weber, an archeologist at the University of Pennsylvania, suspected that the skeletons may have been kungas because marks on the teeth and patterns of wear suggested the animals were purposely fed instead of being left to graze and wore bit harnesses in their mouths, Tom Metcalfe reports for Live Science’s.

Harsh desert conditions poorly preserved DNA from the 25 skeletons obtained from the Umm el-Marra site, so researchers use advanced sequencing methods to compare the bits and pieces of DNA, Science reports.

Researchers then compared the results to an 11,000-year-old equid sample taken from the Göbekli Tepe archaeological site in Turkey and genetic material taken from a preserved museum specimen of the last surviving wild Syrian ass that went extinct in 1929, per Gizmodo.

Using Y-chromosome fragments, the team found that the kunga’s paternal lineage belonged to the Syrian wild ass and matched the species of the sample from Turkey. They also confirmed donkeys were the maternal lineage, Gizmodo reports.

According to a statement, the elite used the highly-prized, donkey-like creatures for travel and warfare. They may have been considered status symbols or exchanged as royal gifts. Ancient texts from the kingdom of Ebla and the Diyala region in Mesopotamia detail the prices of obtaining the hybrid animal, which cost six times the amount for a donkey, according to the study.

Like other hybrids in the animal kingdom, such as the mule or the liger, the kunga was sterile. They had to be intentionally bred by mating a female donkey with a male wild ass, per Gizmodo. Because the strong-yet-stubborn male wild asses could run faster than donkeys, capturing these animals alone highlights the technical capabilities of the ancient Mesopotamian societies.

The breeder’s clear choice to use a female donkey also revealed the sophistication of the mating plan for combining different characteristics that these ancient societies found desirable. Since the mother was domesticated, it also would have been easier to keep her in captivity as the offspring were raised, Science reports.

“This is a great example that shows the level of organization and management techniques needed to keep these animals alive,” says zooarchaeologist Benjamin Arbuckle of the University of North Carolina at Chapel Hill, who was not involved with the study, to Science. “It’s very much like modern zoo management.”