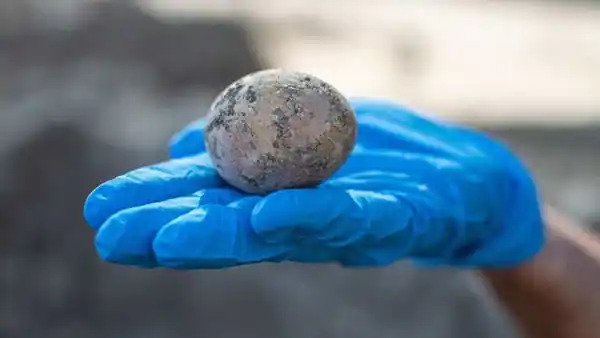 Archaeologists discover an almost fully intact but nearly empty egg and three rare Islamic-period bone dolls in the excavation of settlement dating from the Byzantine period.

During recent digs in the central village of Yavne, archaeologists unearthed an exceedingly unusual, almost fully intact 1,000-year-old chicken egg, according to the Israel Antiquities Authority.

The unexpected discovery was made during an IAA salvage excavation of a historic cesspit going back to the Islamic period, which was carried out ahead of a new neighbourhood construction.

Archaeologists were astounded to uncover a fragile ancient chicken egg that had been perfectly preserved a millennium ago by being originally pillowed in soft human dung within a cesspit, according to an IAA news statement.

“The egg’s unique preservation is evidently due to the conditions in which it lay for centuries, nestled in a cesspit containing soft human waste that preserved it,” IAA archaeologist Alla Nagorsky, the site’s excavation director, said. “Even today, eggs rarely survive for long in supermarket cartons. It’s amazing to think this is a 1,000-year-old find!”

Since the shell was slightly cracked, most of its contents leaked out, but part of the yoke was still inside, which will allow further analysis in the future.

Chicken has been raised in Israel for consumption of eggs and meat for some 2,300 years since the Hellenist period and early Roman period.

Bone assemblages in the land indicate that from the 7th century when the Islamic period began, pork consumption drastically decreased compared to previous centuries.

“Families needed a ready protein substitute that does not require cooling and preservation, and they found it in eggs and chicken meat,” Perry Gal said.

The egg further cracked when it was removed from the site, but was restored to its original state in the IAA organics lab.

The cesspit also contained some other objects, including three bone dolls from the same period.