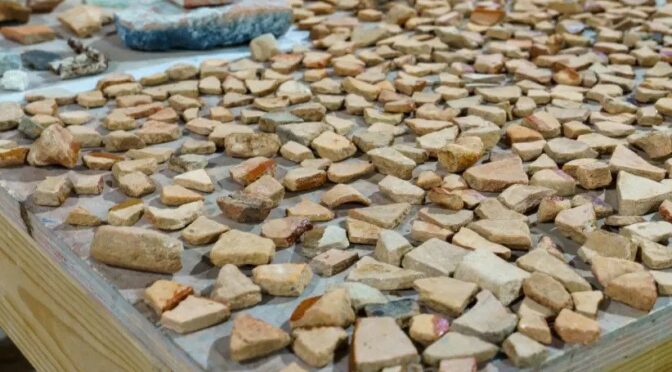 Remains of construction dating back to the period of Roman Emperor Constantine at the Church of the Holy Sepulcher are among the discoveries uncovered during on-going excavations at the Christian holy site since March 2022 as part of a complex two-year project to repair and restore pavement stones of the ancient church.

The finds were presented to leaders of the Christian community of the church during a visit to the excavations on July 11 by Drs. Beatrice Brancazi and Stefano De Togni, members of the archaeological team from the Department of Antiquities of the Sapienza University of Rome who are carrying out the work under the direction of Professor Francesca Romana Stasolla, assisted by Professors Giorgia Maria Annoscia and Massimiliano David.

The researchers said the rock layers of the stone quarry used during the construction of the church during Constantine’s period had been uncovered.

“The rock layers of the quarry have been found,” Romana Stasolla said in a press release issued by the Franciscan Custody of the Holy Land following the visit of the Christian leaders.

According to tradition, up until the first century BCE the area on which the church stands was a stone quarry and traces of these activities are still clearly visible in the chapels below the current church.

The excavations take place according to where restoration work is being done on the pavement stones and in May the archaeologists began excavation in the north nave of the basilica, also known as the Arches of the Virgin, and part of the north-western rotunda. The work is carried out round the clock and in a way not to disturb the daily movement within the church. It is the first time such a systematic excavation of the church has been carried out.

The archaeologists said they also found evidence of trenches dug by Italian Franciscan Friar and Studium Biblicum Franciscanum professor of archaeology Virginio Corbo in the 1960s.

The press report noted that the quarry rock layers are of made up of different heights from “deep and uneven cuts.”

“The operations of the Constantinian construction site had as their primary requirement that of bridging such unevenness of elevation to create a unitary and homogeneous plan to build the structures of the church and its annexes,” Romana Stasolla said in the release.

Progressive layers of soil rich in ceramic material allowing for water drainage were used to level the area, she said.

They were also able to analyze the construction methods of the foundation of the north perimeter wall of the Constantinian complex, she said, and uncovered mosaic tiles believed to be from floor pavements.

Constantine began construction on a church at the site in 326 CE, building on top of Roman Emperor Hadrian’s temple of Capitoline Jupiter built between 135 and 136 CE as he repressed an anti-Roman revolt by founding the city of Aelia Capitolina.

“The operations of the Constantinian construction site had as their primary requirement that of bridging such unevenness of elevation to create a unitary and homogeneous plan to build the structures of the church and its annexes.”

In the north-western area of the rotunda, the archaeologists continued with the excavation of a tunnel near the aedicule, traditionally held to be the tomb of Jesus by Christians, which had been uncovered during the first phase of restoration work at the church. The tunnel descends vertically 2.8 m. next to the aedicule and then continues horizontally to the north, said the report.

“Its discovery in relation to the excavation stratigraphy and its connection with the entire water outflow system is an important aspect in the study of the architectural elements and will be analyzed within the project,” said the report.

Processing of the materials uncovered at the dig is carried out in real-time between Jerusalem and Rome, noted in the report, and data processed during the excavation is entered into a database created for the project which is linked to different historical and archive sources with remote support from team members in Rome.

This second phase of restoration work at the Church of the Holy Sepulchre is being conducted under the direction of the Franciscan Custody of the Holy Land in cooperation with the Greek Orthodox Patriarchate and the Armenian Patriarchate, the three historical guardians of the Church according to the 1852 Status Quo agreement that solidified the territorial division among the Christian communities in the church and other holy Christian sites.

At the start of the recent restoration and excavation work in March, Prof. Giorgio Piras, director of the Department of Ancient Sciences at the Sapienza University of Rome, told The Jerusalem Post that most of the remains found would likely be covered up in accordance with the status quo.