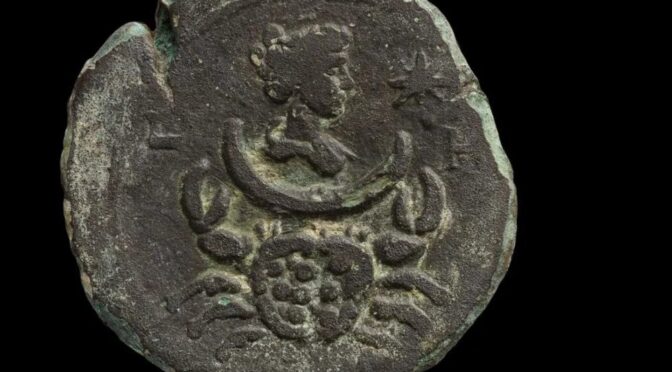 A nearly 2,000-year-old Roman coin, etched with a symbol of the zodiac, was fished from the waters around Haifa in northern Israel, reports the Agence France-Presse (AFP).

Archaeologists with the Israel Antiquities Authority (IAA) made the discovery while conducting an underwater archaeological survey.

The bronze coin was minted in Alexandria, Egypt, during the reign of the Roman emperor Antoninus Pius, and it was found in “an exceptional state of preservation,” according to a statement from the Israeli prime minister’s office, per Google Translate.

One side of the coin features an image of Luna, the Roman goddess of the moon, and an image of the zodiac sign for Cancer; the other side depicts Antoninus Pius.

The coin also bears the inscription “Year Eight,” indicating that it was produced during the eighth year of Pius’ rule, which spanned from 138 to 161 C.E.

This ancient relic belonged to a series of 13 coins, portraying the 12 signs of the zodiac and the complete zodiac wheel, per a statement from IAA. It is the first such coin that has been discovered off the coast of Israel.

Astrology, which originated in Mesopotamia circa the third millennium B.C.E., was deeply entrenched in Roman culture.

Though sometimes viewed with suspicion and hostility by emperors, who understood that astrological predictions could be used to subvert their authority, astrology was a popular practice among all classes of Roman society.

“Astrology was only one of a wider number of divinatory practices in the empire,” writes Matthew Bunson in the Encyclopedia of the Roman Empire. “But for capturing the public interest and imagination, all paled alongside astrology.”

Pius led the empire through one of its most peaceful eras. Before this period, hostilities abounded in what is now Israel—particularly in the years after 70 C.E., when Roman forces destroyed the Second Temple in Jerusalem.

In 130 C.E., the emperor Hadrian initiated plans to build a Roman metropolis in Jerusalem. He also outlawed circumcision, a core practice in Judaism.

Shortly afterwards, Jews launched a rebellion against Roman rulers known as the Bar Kochba Revolt. Roman forces ultimately quashed the rebellion after three years of fighting and “enormous losses” on both sides.

Conversely, Pius, who succeeded Hadrian, was “not a military man,” writes the Washington Post’s Rachel Pannett. He helped cool relations with the empire’s Jews by allowing them to resume the practice of circumcision.

The bronze coin depicting Pius was found near a “small hoard” of other coins, indicating that it fell into the sea during a shipwreck, Jacob Sharvit, head of the IAA’s marine archaeology unit, tells the AFP.

These ancient sites must be safeguarded “in the light of diverse development interests” along Israel’s coasts, says Eli Eskosido, the IAA’s general director, in the IAA statement.

“Rather than simply defining the country’s border,” he adds, “the sea is now recognized as an integral part of our cultural heritage.”