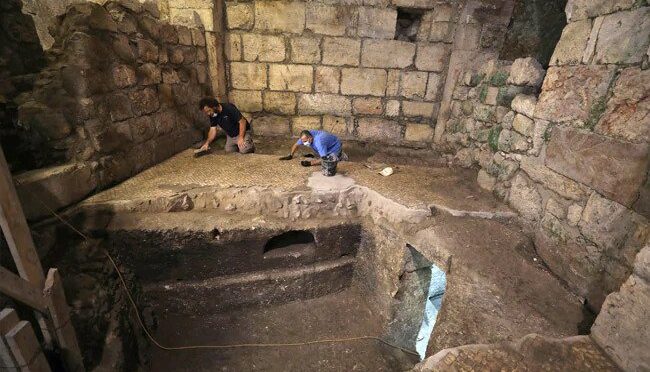 Two thousand years ago, the chambers were consisting of an open courtyard and two rooms, were carved on top of one another and connected by hewn staircases.

According to a statement from the Israel Ancientities Authority, inside the chambers, archaeologists discovered clay-cooking pots, cores of oil lamps, a stone mug, and a qalal or a large stone basin that was used to hold water for rituals.

The archeologists also found a long carving at the entrance to the chambers for shelves and depressions for door hinges and bolts, as well as round, square and triangular niches carved into the walls, some of which could have been used to place oil-lamps in.

These findings likely mean that these chambers were used daily, according to the statement. But it’s not clear what they were actually used for.

“Perhaps, it served as a pantry for an overhead structure that didn’t survive, or as a hewn space” for living underground, Mordechai Eliav, the director of the Western Wall Heritage Foundation, said in the statement.

“We’re asking ourselves what was the function of this very complex rock-cut system?” co-director of the excavation Barak Monnickendam-Givon said in an accompanying video.

People could have lived in these underground chambers or stored food or groceries there for possibly another long-gone building above it.

“Another possibility is that this system was used for hiding during the siege on Jerusalem 2000 years ago when the Roman legions conquered the city,” he said.

The subterranean chambers were hidden beneath the white mosaic floor of a public building that was created around 1,400 years ago during the Byzantine period.

The building was renovated about 1,250 years ago, during the Abbasid period, according to the statement. In the 11th century, the building was destroyed and the subterranean chambers, along with other finds, were buried and stayed hidden for centuries.

These chambers were found in the “Beit Strauss” complex, beneath the entrance lobby to the Western Wall Tunnels, which helped the builders of the wall support its massive weight. (The tunnels also contained channels that supplied water to the Second Temple, according to Atlas Obscura).

The complex was likely used by residents of the city during the early Roman period, before Jerusalem was destroyed in A.D. 70, according to a statement from the Israel Antiquities Authority.

The Western Wall is the only remaining part of the Second Temple of Jerusalem, which the Romans destroyed along with the rest of the city, according to the Encyclopedia Britannica.