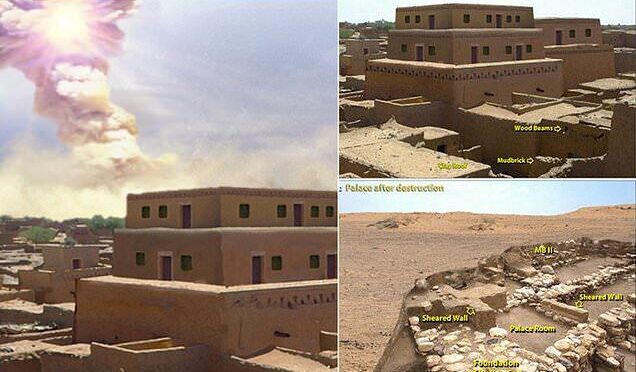 Researchers find 3,600 year-old evidence that Tall el-Hammam was destroyed by a ‘cosmic airburst’

A research team including East Carolina University’s Dr Sid Mitra, professor of geological sciences, has presented evidence that a Middle Bronze Age city called Tall el-Hammam, located in the Jordan Valley northeast of the Dead Sea, was destroyed by a cosmic airburst.

Archaeological excavation of the site began in 2005, Mitra said, and researchers have been particularly interested in a citywide 1.5-meter-thick destruction layer of carbon and ash.

“They found all this evidence of high-temperature burning throughout the entire site,” Mitra said. “And the technology didn’t exist at that time, in the Middle Bronze Age, for people to be able to generate fires of that kind of temperature.”

The site includes a massive palace complex with thick walls and a monumental gateway, much of which was destroyed.

The researchers developed a hypothesis that there had been a meteorite impact or bolide — a meteor that explodes in the atmosphere.

The researchers compared the airburst to a 1908 explosion over Tunguska, Russia, where a 50-meter-wide bolide detonated, generating 1,000 times more energy than the Hiroshima atomic bomb.

Researchers in a variety of fields were called upon to analyze evidence from the site, including Mitra, whose lab focuses on the analysis of soot.

“So we analyzed the soot at this site, and saw that a large fraction of the organic carbon is soot, and you just can’t have that unless you have really high temperatures,” Mitra said. “So that’s what led us to provide support to the story that this was a very high-temperature fire. … And that then supported the idea that this was an external source of energy such as a meteor.”

Other research that supported the hypothesis included the presence of diamond-like carbon, melted pottery, mudbricks and roofing clay; the directionality of the debris; high-pressure shock metamorphism of quartz; high-temperature melted minerals; and human bones in the destruction layer.

There is also a high concentration of salt in the destruction layer, which could have ruined agriculture in the area, explaining the abandonment of more than a dozen towns and cities in the lower Jordan Valley in the following centuries.

The researchers considered and dismissed other potential processes that could explain the destruction, including volcanic or earthquake activity, wildfire, warfare and lightning, but none provided an explanation for the various lines of evidence as well as a cosmic impact or airburst.

The paper, titled “A Tunguska sized airburst destroyed Tall el-Hammam a Middle Bronze Age city in the Jordan Valley near the Dead Sea,” also speculates that “a remarkable catastrophe, such as the destruction of Tall el-Hammam by a cosmic object, may have generated an oral tradition that, after being passed down through many generations, became the source of the written story of biblical Sodom in Genesis.”

Genesis 19:24 describes sulfur raining down out of the heavens and the destruction of the cities and all those living in them, as well as the vegetation in the land.

“So some of the oral traditions talk about the walls of Jericho (about 13 1/2 miles away) falling down, as well as the fires if they’re associated with Sodom,” Mitra said. “Again it’s science; you look at your observations, and in this case, it’s the historical record, and you see what you hypothesize and if it fits the data and the data seem to fit.”

The study does not attempt to prove or disprove that possibility, but its explanation of the destruction of the city could be consistent with the biblical accounts.

Mitra said it was rewarding to work with other researchers who were approaching the question from different angles. Most of them he had never worked with before, he said.

“That type of approach tends to be a robust study,” he said. “If someone comes along and says you didn’t do this right or there’s no way that this could have happened, you can still fall back on [all these] other things that support the same argument.”