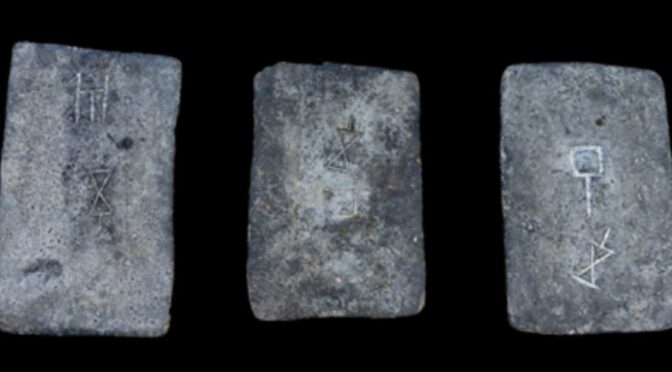 Scientists find that tin found in Israel from 3,000 years ago comes from Cornwall, England.

Archaeologists believe it shows that tin was transported over long distances about 3000 years ago. Moreover, the researchers may have solved the mystery of the origin of the tin that was so vital for Bronze Age cultures.

The origins of Bronze-age tin ingots have been investigated by researchers from the University of Heidelberg and the Curt Engelhorn Center for Archaeometry in Mannheim. Tin ingots from the Bronze Age discovered by marine archaeologists off the coast of Israel.

According to Phys.org, the researchers used “lead and tin isotope data as well as trace element analysis” to identify where the metal was originally mined. What they found was totally unexpected.

The researchers established that the “3,000-year-old tin ingots found in Israel are actually from Cornwall and Devon” reports the Daily Mail.

These areas are in southwest Britain and were the sites of tin mines until modern times. The experts then analyzed tin ingots that were found in Greece and Turkey and they discovered that they had also come from Devon and Cornwall.

Based on the findings it seems that the tin was formed into ingots and exported from Devon and Cornwall. Given the limited technology at the time and the lack of roads, the most plausible way for the ingots to have reached modern-day Israel was by sea.

It seems that “the British Isles had developed maritime trade routes with the rest of the world as early as the Bronze Age ” according to the Daily Mail. These trade routes were probably very complex and covered great distances.

Tin was essential for societies in the eastern Mediterranean and there would have been a great demand for high-quality tin, and this would have encouraged the development of international trade routes. This could have led mariners to travel great distances to secure the metal.

The trade-in tin ingots were probably very dangerous but also very profitable. Other materials that were likely traded along these international trade networks were amber, copper, and luxury items. The fact that Bronze Age merchants could trade over vast distances shows that they were proficient sailors.

The findings of the research are very important and allow us to have new insights into the trade in the distant past. It identifies for the first time the origin of the tin, that was so important in the Bronze Age.

It strongly indicates that international trade was much more advanced, 3,000 years ago, than widely supposed. The results could also guide archaeological research in the future.