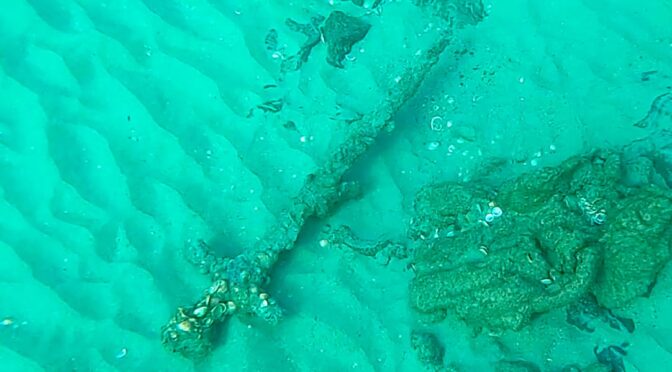 An amateur diver off the Mediterranean coast has discovered a sword dating back to the Middle Ages. Experts believe the site is home to several archaeological treasures. An Israeli scuba diver discovered an ancient sword believed to have belonged to a Medieval Crusader, the Israel Antiquities Authority said Monday.

The meter-long blade was lying on the Mediterranean seabed off the Carmel coast in five-meter-deep (5.5-yard deep) water, encrusted with marine organisms.

The man, identified as Shlomi Katzin, was on a weekend dive in northern Israel when he noticed its distinctive hilt and handle after the undercurrent shifted the sand that concealed it.

Worried that his discovery might be buried or stolen, he took the sword and gave it to government experts.

“The sword, which has been preserved in perfect condition, is a beautiful and rare find and evidently belonged to a Crusader knight,” said Nir Distelfeld, an inspector in the authority’s robbery prevention unit.

“It is exciting to encounter such a personal object, taking you 900 years back in time to a different era, with knights, armour, and swords,” he said.

Besides the near-millennium-old sword, the diver found a trove of ancient artefacts, including anchors and pottery.

The location of the discovery was a natural cove near the port city of Haifa that, experts say, served as a shelter for seafarers.

The Israel Antiquities Authority said they have monitored the site since June, but “the finds are very elusive since they appear and disappear with the movement of the sands.”

READ ALSO: 2,400-YEAR-OLD FRUIT BASKETS FROM THONIS-HERACLEION FOUND OFF THE COAST OF EGYPT

The sword will be cleaned, restored, and further analyzed before it is put on display.

Katzin, who handed it over to the authorities, received a certificate of appreciation for good citizenship.