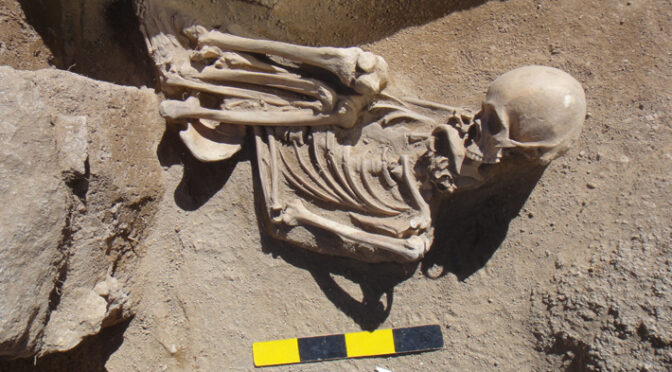 Radio Cadena Agramonte reports that 12 graves dated between 6,000 and 1,300 years ago were unearthed in northwestern Argentina by a team of researchers from the University of Buenos Aires–National Scientific and Technical Research Council (CONICET), during investigations over the past 15 years.

According to the source, most were found fortuitously by residents of the area who, upon finding the remains, alerted the archaeological team that has been studying pre-Hispanic burial practices in northwestern Argentina for years.

The doctor in Archeology, Leticia Cortés, a specialist in burial methodologies in pre-Hispanic populations that inhabited the Valle del Cajón area, explained that when these practices are compared with current ones, they may seem strange.

“Knowing these customs, we can reconstruct the cultural practices of the past and put into perspective our own traditions, which are part of a cultural construction,” said Cortés, a researcher at the Institute of Cultures.

The search of this type began more than 15 years ago, with a research team dependent on the National Council for Scientific and Technical Research, led by María Cristina Scattolin and dedicated to excavation and analysis tasks in the town of Valle del Cajón.

This practice of burials before the arrival of the Spanish was far from what is customary today on the basis of the Judeo-Christian model.

Cortés pointed out that this type of find usually occurs after the rainy season, in summer, which is uncovered and the bones are exposed.

“There was a great variability of burial methods, in individual or collective graves, and also in the posture of the bodies.

Some are hyperflexed, like squatting, with the shoulders touching the knees, others extended and disjointed and mixed, ”explained the specialist.

Cortés pointed out that many times people lived with their dead on a daily basis, buried them in the same patio where they cooked, made pots or carved stones. It is an interesting thing to see the different conceptions that were had about life and death, he said.

According to archaeology, they continue working and have found necklaces and pendants that would be associated with the deceased, as non-transferable objects that are buried next to the body and remain there.