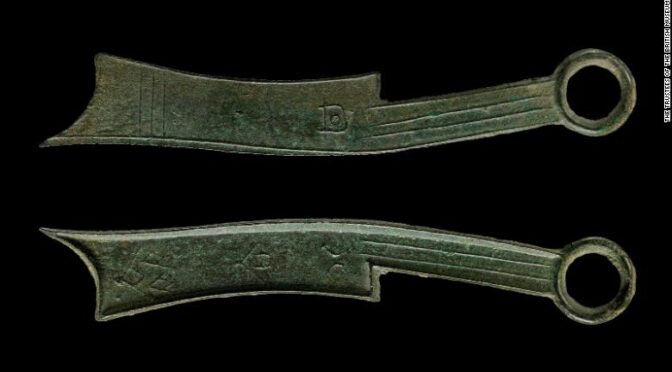 An analysis of a 2,300-year-old text and coins has helped researchers decipher ancient recipes for bronze, including two linguistically elusive ingredients.

The Kao Gong Ji, the oldest known technical encyclopedia, was written around 300 BC and is part of a larger text called The Rites of Zhou. The ancient text includes six chemistry formulas for mixing bronze and lists items like swords, bells, axes, knives and mirrors, as well as how to make them.

For the past 100 years, researchers have struggled to translate two of the main ingredients, which are listed as “jin”and “xi.” Experts believed these words translated to copper and tin, which are key components in the bronze-making process. When researchers tried to re-create the recipes, however, the resulting metal didn’t match up with the composition of ancient Chinese artefacts.

Now, two researchers believe they have accurately identified the true meaning behind the mystery ingredients. The journal Antiquity published its findings on Tuesday.

The revelation allows for a better understanding of ancient bronze production — and opens up new questions about when this process began, given that large-scale bronze production happened long before the six recipes were shared in the Kao Gong Ji, said study coauthor Ruiliang Liu, curator of the Early China Collection at the British Museum in London.

In modern Chinese, jin means gold. But the ancient meaning of the word could be copper, copper alloy or even just metal, which is why it has been difficult to determine the specific ingredients.

“These recipes were used in the largest bronze industry in Eurasia during this period,” said Liu in a statement. “Attempts to reconstruct these processes have been made for more than a hundred years, but have failed.”

Liu and lead study author Mark Pollard analyzed the chemical composition of Chinese coins minted close to when the Kao Gong Ji was written. Pollard is the Edward Hall Professor of Archaeological Science at Oxford University and director of the Research Laboratory for Archaeology and the History of Art.

Previously, researchers had thought the coins were made by diluting copper with tin and lead.

The analysis showed that the chemical composition of the coins was a result of mixing two pre-prepared metal alloys, one made of copper, tin and lead, and the other copper and lead.

“For the first time in more than 100 years of scholarship, we have produced a viable explanation of how to interpret the recipes for making bronze objects in early China given in the (Kao Gong Ji),” Pollard said in a statement.

The findings have shown that ancient Chinese bronze-making relied on combining alloys instead of pure metals and that metalsmithing was more complex than previously thought.

“It indicates an additional step — the production of pre-prepared alloys — in the manufacturing process of copper-alloy objects in early China,” Liu said. “This represents an additional but previously unknown layer in the web of metal production and supply in China.”

Archaeologically, this additional step would have remained invisible if not for chemical analysis, the researchers said.

“Understanding the alloying practice is crucial for us to understand the exquisite bronze ritual vessels as well as the underlying mass production in Shang and Zhou societies,” Liu said.

Using this type of analysis could help researchers decipher other texts about ancient metallurgy from different cultures and regions in the future, the researchers said.