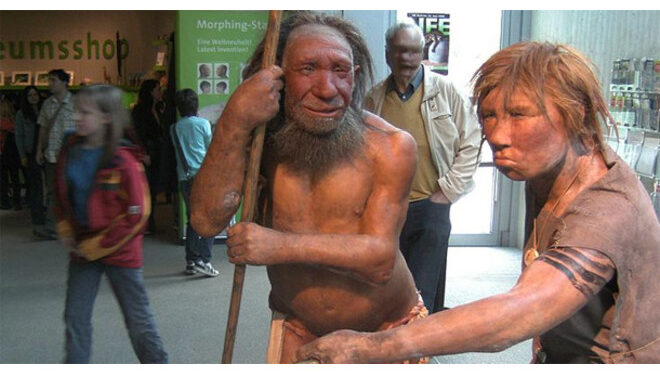 Chronological research at the Boker Tachtit site in Ein Avdat National Park, in Israel’s Negev desert, provides the first proof of the two cultures’ coexistence in the Negev and pinpoints the time when modern humans left Africa – 50,000 years ago.

Where and when did modern humans and Neanderthal man meet? Groundbreaking research based on re-excavation of the important prehistoric site of Boker Tachtit in Ein Avdat National Park has identified a clearly defined area where the two populations existed at the same time, determining that the species met in the Negev, 50,000 years ago.

The research, published on Wednesday in the prestigious scientific journal PNAS, is led by Prof. Elisabetta Boaretto of the Weizmann Institute of Science and Dr. Omry Barzilai of the Israel Antiquities Authority.

Genetic studies have shown that modern humans and Neanderthals met in the distant past in the geographical region of Eurasia (which includes Israel) and even exchanged genes. However, the exact time and place of these encounters have remained unknown, until now.

New research based on renewed excavations at the important prehistoric site of Boker Tachtit in Ein Avdat National Park identified the earliest evidence of modern human activity in the Negev in the same time frame Neanderthal man inhabited the region. The study provides the first concrete proof for the coexistence of the two cultures in the Middle East.

The research, published on Wednesday in the prestigious scientific journal PNAS and led by Prof. Elisabetta Boaretto of the Weizmann Institute of Science and Dr. Omry Barzilai of the Israel Antiquities Authority, ascertains that modern man (Homo sapiens) migrated from Africa to Israel 50,000 years ago.

“Boker Tachtit is the first known site reached by a modern man outside Africa, which is why the site and its precise dating are so important,” says Dr. Omry Barzilai, excavation director at the Boker Tachtit site on behalf of the Israel Antiquities Authority.

“The dating of the site to 50,000 years ago proves that modern man lived in the Negev at the same time as Neanderthal man, who we know inhabited the region in the same period.

There is no doubt that, as they dwelt in and moved around the Negev, the two species were aware of each other’s existence. Our research on the Boker Tachtit site places an important, well-defined reference point on the timeline of human evolution.”

the excavation was funded by the Max Planck-Weizmann Center for the Integrative Archaeology and Anthropology. As part of the study, dozens of carbon samples from the renewed excavation were analyzed using radiocarbon dating in Prof. Elisabetta Boaretto’s laboratory at the Weizmann Institute of Science.

According to Dr. Barzilai, “For the first time in prehistoric research, the results of the dating prove the hypothesis that there was definitely a spatial overlap between the late Mousterian culture, identified with Neanderthal man, and the Emiran culture, which is associated with the emergence of modern man in the Middle East.”

Neanderthal man lived in Europe and Central Asia, whereas modern man lived in Africa. In particular, the Middle East and the region of Israel were at the limits of the distribution of these two species. They, therefore, also contain remnants of the two populations at different times.

DNA studies show that about 60,000 years ago, groups of modern humans began a widespread migration process from Africa to Asia and Europe and from there to the rest of the world, which ultimately led to the disappearance of Neanderthals and their assimilation into the modern human population.

Therefore, the research hypothesis is that there was short-term interaction between the ancient peoples and cultures along the migration routes, including genetic exchange. The present study is the first to confirm this hypothesis, proving that at least one of these intercultural encounters occurred in Negev some 50,000 years ago.

“What was the nature of the encounter we have identified between the two human species? Did Neanderthals throughout the country become naturally extinct, merging with modern man, or did they disappear in violent ways? These questions will continue to concern us as researchers in the coming years,” concludes Dr. Barzilai.