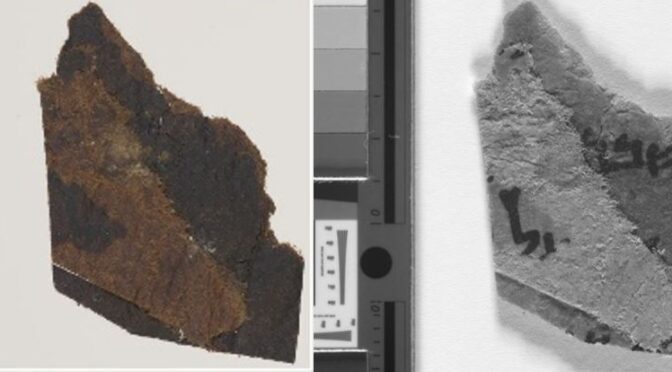 Four fragments of the manuscript Dead Sea Scroll, located in the John Rylands Library of the University of Manchester, which were previously thought to be blank, do in fact contain text.

The finding reveals that Manchester University is the only UK institution with authenticated textual fragments of the Dead Sea Scrolls.

Unlike the recent cases of forgeries assumed to be Dead Sea Scrolls fragments, all of these small pieces were unearthed in the official excavations of the Qumran caves and were never passed through the antiquities market.

In the 1950s, the fragments were gifted by the Jordanian government to Ronald Reed, a leather expert at the University of Leeds, so he could study their physical and chemical composition.

It was assumed that the pieces were ideal for scientific tests, as they were blank and relatively worthless. These were studied and published by Reed and his student John Poole, and then stored safely away.

In 1997 the Reed Collection was donated to The University of Manchester through the initiative of Rylands Professor of Biblical Criticism and Exegesis, George Brooke. These fragments have been stored in Reed’s own labeled boxes in The John Rylands Library, and have been relatively untouched since then.

When examining the fragments for the new study, Professor Taylor thought it possible that one of them did actually contain a letter, and therefore decided to photograph all of the existing fragments over 1 cm that appears blank to the naked eye, using multispectral imaging.

51 fragments were imaged front and back. Six were identified for further detailed investigation—of these, it was established that four have readable Hebrew/Aramaic text written in carbon-based ink. The study has also revealed ruled lines and small vestiges of letters on other fragments.

The most substantial fragment has the remains of four lines of text with 15-16 letters, most of which are only partially preserved, but the word Shabbat (Sabbath) can be clearly read. This text (pictured) may be related to the biblical book of Ezekiel (46:1-3). One-piece with text is the edge of a parchment scroll section, with sewn thread, and the first letters of two lines of text may be seen to the left of this binding.

“Looking at one of the fragments with a magnifying glass, I thought I saw a small, faded letter—a lamed, the Hebrew letter “L,'” said Professor Taylor. “Frankly, since all these fragments were supposed to be blank and had even been cut into for leather studies, I also thought I might be imagining things. But then it seemed maybe other fragments could have very faded letters too.”

“With new techniques for revealing ancient texts now available, I felt we had to know if these letters could be exposed. There are only a few on each fragment, but they are like missing pieces of a jigsaw puzzle you find under a sofa.”

The research team is currently undertaking further investigations of these fragments in consultation with The John Rylands Library and Professor Brooke, as part of a larger project studying the various Qumran artifacts at the John Rylands Library. The results will be published in a forthcoming report.

“I am hugely grateful to Professor Joan Taylor and her colleagues, and to the brilliant work of our imaging specialists, for bringing this astonishing discovery to light.

Our University is now the only institution in the United Kingdom to hold authenticated textual fragments of the Dead Sea Scrolls.

It is particularly fitting that these fragments are held here at The John Rylands Library, one of the world’s greatest repositories of Judaeo-Christian texts,” says Professor Christopher Pressler, John Rylands University Librarian and Director of the University of Manchester Library.