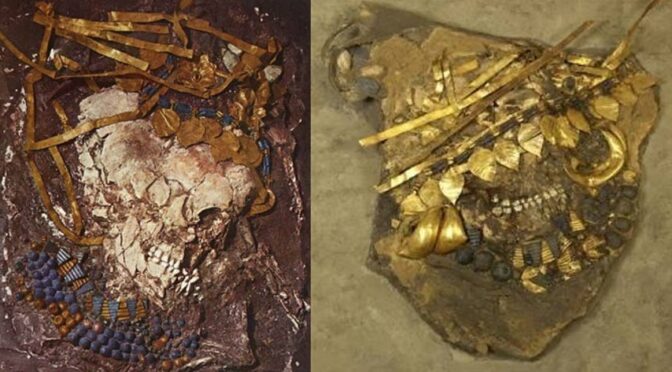 The Great Death Pit of Ur: Mass Human Sacrifice in Ancient Mesopotamia

As Sir Charles Leonard Woolley excavated at Ur between 1922 and 1934, every burial without a grave chamber was called the “death pit” (known also as ‘grave pits’).

Woolley and his team excavated the PG 1237, which Woolley called ‘ The Great Death Pit, ‘ due to the number of bodies that were found in it. These bodies were arranged neatly in rows and were richly dressed.

They are generally believed to be sacrificial victim who accompanied their master / mistress in the afterlife. It is unclear, however, if they had done so voluntarily.

During Woolley’s archaeological excavations at Ur, a total of six burials were assigned as ‘death pits’. Generally speaking, these were tombs and sunken courtyards connected to the surface by a shaft. These ‘death pits’ were thought to have been built around or adjacent to the tomb of a primary individual.

This hypothesis, however, has been challenged in recent times. In any case, the ‘death pits’ discovered by Woolley and his team were filled with the remains of retainers belonging to an important individual.

The most impressive of Woolley’s ‘death pits’ is PG 1237, which was named by Woolley as the ‘Great Death Pit’. In this ‘death pit’, Woolley and his team identified a total of 74 individuals, six of whom were male and the rest female.

The bodies of the six men were found near the entrance of the ‘death pit’ and were equipped with a helmet and weapons. It is thought that these men played the role of guards and were responsible for protecting the tomb from potential grave robbers.

As for the women, the majority of them were arranged in four rows in the northwestern corner of the tomb, whilst six were under a canopy in the southern corner and another six near three layers near the tomb’s southeastern wall.

Woolley was of the opinion that all the individuals in the ‘Great Death Pit’ were the retainers of an important personage whose tomb chamber had been destroyed sometime in the past. This view, however, has been challenged in more recent times.

In Aubrey Baadsgaard’s 2008 doctoral dissertation on fashion in Early Dynastic Mesopotamia, the author suggested that the person for whom the ‘Great Death Pit’ was built was buried in that tomb, and that Woolley may have missed her.

Baadsgaard pointed out that one individual, dubbed Body 61, was more richly adorned than the rest of the female attendants. Unlike the other women, who wore simple headdresses of gold, silver, and lapis lazuli, the headdress worn by Body 61 was much more elaborate.

The only other woman known to possess a similarly ornate headdress is Puabi, who is generally regarded to have been a queen. The jewelry ensemble of Body 61 is also found to have resembled that of Puabi and the unknown royal woman in PG 1054, hence leading to the conclusion that Body 61 is the owner of the ‘Great Death Pit’.

Other questions regarding the ‘Great Death Pit’, however, still remain. The most intriguing of which is perhaps that pertaining to the way the attendants died.

Based on the organization of the bodies, Woolley proposed that these individuals had voluntarily accompanied their mistress into the afterlife. Woolley also suggested that they had taken some kind of poison, which either killed them or made them unconscious.

A study conducted by the University of Pennsylvania Museum of Archaeology and Anthropology on the skulls of a woman and a soldier, however, found signs of pre-mortem fractures caused by a blunt instrument.

One of the theories emerging from this finding is that the dosage of poison consumed by some of the attendants was not enough to kill them, and therefore they were struck on their heads to prevent them from being buried alive.

Alternatively, it has been suggested that the victims were first given a sedative and then clubbed to death when they were unconscious.

This seems unlikely, however, as it would have been messier than was necessary, and, if it were true, then all the skulls would have displayed signs of pre-mortem fracture as seen in the two skulls that were studied. In short, this question is still an open one, and further research is needed to solve it.