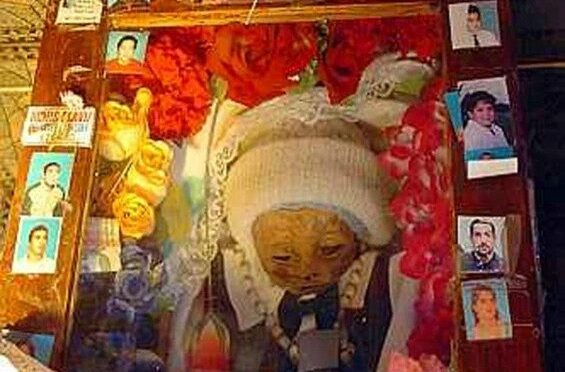 There are thousands of pilgrims hundreds of miles traveling to visit the tiny body of Miguel Ángel Gaitán, Spanish for “Miracle Child”. “El Angelito Milagroso.”

Fifteen days prior to his first birthday in 1967, Miguel died of meningitis. Seven years ago, however, he apparently returned from beyond the grave seven years later and refused to go back – so his family members displayed their wrinkled corpse to worshippers to visit.

El Angelito was buried where he was born in Banda Florida, a small town in the northwest of Argentina.

But seven years later something odd began to happen when the boy’s grave and the coffin would often be found open – with objects and pieces of a stone thrown all around it.

The cemetery janitors initially blamed violent rainstorms that were battering the city at the time.

But the mysterious happenings continued even after the weather improved.

The boy’s mother said: “We would even put stones and other objects over the cover – but every morning we’d find it open.

“We then figured Miguelito did not want to be covered – he wanted to be seen.”

Villagers moved the coffin out in the open – but then the coffin’s lid kept being removed.

Interpreting the bizarre phenomenon as a further sign Miguel wanted to be seen, the family moved him to a coffin with a glass lid.

The child’s body quickly became a local attraction and rumours began to spread far and wide about his supposed magical powers.

For decades now thousands of Argentinians from across the country have descended on the remote town to seek a miracle.

One man – Daniel Saavedra – went to visit El Angelito when he fell ill with a rare pancreatic disease and within weeks he made a full recovery – he claims.

While some people believe touching the mummy’s forehead can help them, others just come to see the peculiar situation and hear the story.

Many of the visitors leave toys and flowers at the tomb.