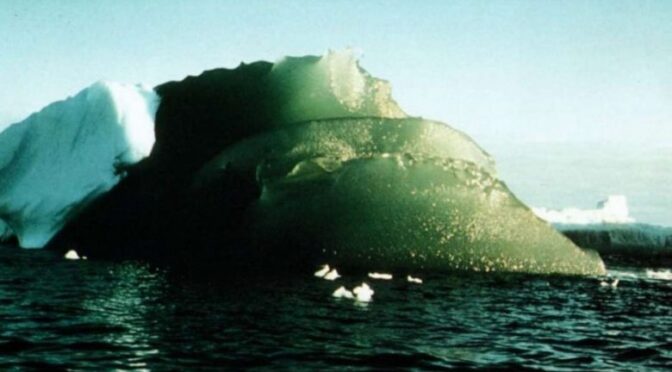 The Mystery Behind the “Rare Emerald Icebergs” of Antarctica

For decades, the sight of bottle-green icebergs in the Antarctic has captivated polar travellers and scientists. The mysterious phenomena have intrigued many journals, but the “why for their presence has remained enigmatic. Today scientists have suggested a new theory of why these jade bergs are happening, and if verified, a decades-long enigma will be solved.

During an Australian expedition in 1988, the search to discover the secret of the green monoliths started when glaciologist Stephen Warren from the University of Washington climbed up on one to get a better look at it.

“What is most amazing is not their colour but rather their clarity, because they have no bubbles,” said Warren to IFLScience.

Ordinary icebergs, on the other hand, originate as snow and “as the snow is compressed under its own weight into ice, the air in the snow is closed off as bubbles. So glacier ice contains numerous bubbles, and icebergs are bright and cloudy.”

The emerald ice, however, has no bubbles, suggesting it is not ordinary glacier ice. Warren took a core sample from a glacier near East Antarctica’s Amery Ice Shelf and compared it to other green ice samples from Australian expeditions in the 1980s. He found that the clear jade colouration was due to marine ice, not glacier ice.

Most icebergs seen by sailors in Antarctica are white or blue, some are even striped.

Green is a rarity. At first, Warren’s team suspected impurities in the ocean water beneath were transforming the ice green, perhaps from the trapped microscopic particles of dead marine plants and animals. But a sample of the ice proved their theory wrong: green and blue marine ice have similar amounts of organic material.

It wasn’t until a few years ago that Warren was inspired to have another go at an idea. His inspiration was born from research by oceanographer Laura Herraiz-Borreguero at the University of Tasmania, who found that the Amery Ice Shelf core had nearly 500 times more iron than the glacial ice above.

He wondered if it was possible iron oxides are turning the common blue hue of ice a dark green. If so, where was the iron coming from? These compounds are scarce in many regions of the ocean.

Warren believes the answer may lie in “glacial flour” – the powder formed from glaciers grinding over bedrock, eroding particles from the surface. These iron-rich particles then flow into the ocean and become caught under an ice shelf, where they mingle with the marine ice as it forms.

The finding could play a role in sustaining life in the oceans. Iron is a key nutrient for the microscopic plants upon which many other organisms rely. If the green icebergs are shuttling iron from Antarctica’s mainland to the Southern Ocean, it could be a crucial process to marine life.

“Iron is the limiting nutrient for phytoplankton in the Southern Ocean, so the biological oceanographers are keen to quantify the various sources of iron,” said Warren, whose study is published in the Journal of Geophysical Research: Oceans.

“Phytoplankton are the base of the food chain in the Southern Ocean. The photosynthesis by this phytoplankton also removes CO2 from the atmosphere, so they are important in the global carbon cycle.

With global warming, if the ocean water flowing in under the ice shelf becomes warmer, then probably less marine ice will form, and less iron will be delivered to the phytoplankton.”

To confirm their hypothesis, the team recommend further analysis of short cores from icebergs to measure dissolved organic carbon and particulate organic carbon versus depth, as well as the mineralogy of the iron.

In the future, Warren, Herraiz-Borreguero, and her advisor Delphine Lannuzel hope to work together to sample icebergs for iron and measure their reflectance spectra.