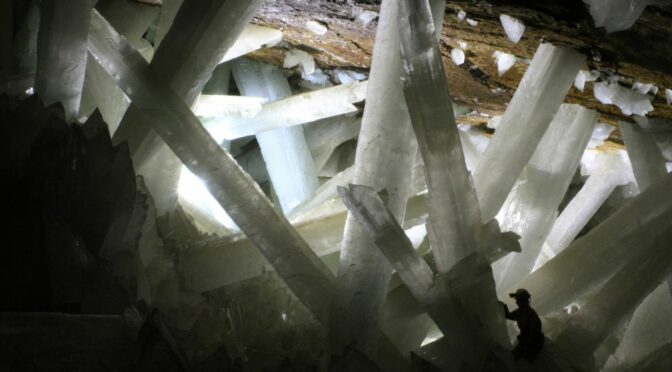 The Mystery of the Giant Crystals: How the 36-foot Geode of Pulpí Formed

In an abandoned mine in southern Spain, there is a room of pure crystal.

You have to go to a deep tunnel, get into a ladder in the rocks, and squeeze across a jagged gypsum crystal tube that is barely wide enough for a person. If you make it that far, you’ll be standing inside the world’s largest geode: the Pulpí Geode, a 390-cubic-foot (11 cubic meters) cavity about the size of a cement mixer drum, studded with crystals as clear as ice and sharp as spears on every surface.

While you may have never stood inside a geode, you’ve probably held, or at least seen, one before.

“Many people have little geodes in their home,” Juan Manuel García-Ruiz, a geologist at the Spanish National Research Council and co-author of a new paper on the history of the Pulpí Geode, told BBC. “It’s normally defined as an egg-shaped cavity inside a rock, lined with crystals.”

Those crystals can form after water seeps through tiny pores in a rock’s surface, ferrying even tinier minerals into the hollow interior. Depending on the size of the rock cavity, crystals can continue growing for thousands or millions of years, creating caches of amethyst, quartz and many other shiny minerals.

The crystal columns at Pulpí are made of gypsum — the product of water, calcium sulfate, and lots and lots of time — but not much else has been revealed about them since the geode’s unexpected discovery in 2000.

In a study published in the journal Geology, García-Ruiz and his colleagues attempted to shed some new light on the mysterious cave by narrowing down how and when the geode formed.

García-Ruiz is no stranger to giant crystals. In 2007, he published a study on Mexico’s fantastical Cave of Crystals, a basketball-court-size cavern of gypsum beams as big as telephone poles buried 1,000 feet (300 m) below the town of Naica. Uncovering the history of that “Sistine Chapel of crystals,” as García-Ruiz called it, was made easier by the fact that the crystals were still growing in the mine’s humid bowels.

At Pulpí, however, the mine was completely dry, and the geode’s crystals had not grown in tens of thousands of years. On top of that, the geode’s gypsum spikes are incredibly pure — so translucent that “you can see your hand through them,” García-Ruiz said.

This means they do not contain enough uranium isotopes to perform radiometric dating, a standard method of analyzing how different versions of elements radioactively decay to date very old rocks.

“We had no idea what happened,” García-Ruiz said. “So, we were required to make a cartography of the entire mine to understand its very complicated geology.”

The researchers analyzed and radiometrically dated rock samples around the mine for seven years to figure out how the area had changed since its formation hundreds of millions of years ago. The team’s driving question: Where did the calcium sulfate in the Pulpí Geode come from?

Ultimately, the researchers narrowed down the geode’s formation to a window of about 2 million years (not bad for the 4.5-billion-year-old calendar of geologic time). The crystals must be at least 60,000 years old, the team found because that was the youngest age of a bit of carbonate crust growing on one of the largest crystals in the geode. Since the crust is on the outside of a crystal, the crystal below must be even older, García-Ruiz explained.

Meanwhile, the composition of other minerals in the mine suggests that calcium sulfate was not introduced to the area until after an event called the Messinian Salinity Crisis — the near-total emptying of the Mediterranean Sea that is believed to have occurred about 5.5 million years ago.

Based on the size of the gypsum crystals, it’s likely they started forming less than 2 million years ago, through a very slow-growing process called Ostwald ripening, in which large crystals form through the dissolution of smaller ones, García-Ruiz said. For an everyday example of this process, peer into your freezer.

When ice cream ages past its prime, small ice crystals begin to break away from the rest of the treat. As more time passes, those small crystals lose their shape and recombine into larger crystals, giving the old ice cream a distinctly gritty texture.

The Pulpí Geode may not be as tasty as ice cream, but merely knowing that magical places like this exist comes with its own sweet satisfaction.

Thanks in part to the research team’s mapping efforts, tourists are now allowed to visit the Pulpí Geode, and García-Ruiz certainly wouldn’t blame you for doing so. Squeezing past the jagged gypsum gateway and into the geode’s cavity for the first time several years ago, García-Ruiz recalled one feeling: “euphoria.”