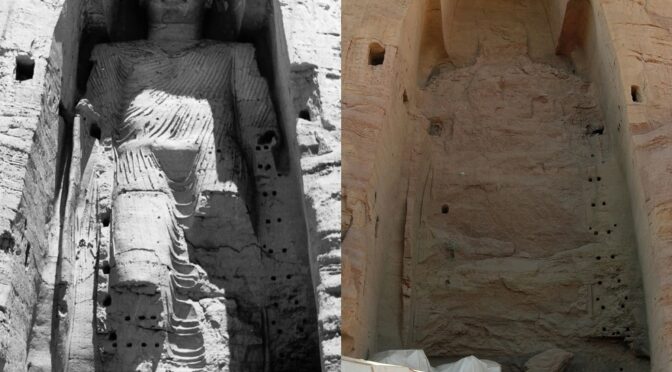 First, they destroyed television sets. Then they destroyed heritage sites. Since 1992, the Taliban’s war on art is the most revolting and senseless crusade anyone has ever accomplished. That feat is only rivalled by the destruction of ancient relics and artefacts by Alexander the Great more than 2,300 years ago.

The purge of thousand-year-old artefacts is the result of the Taliban’s mission of eliminating all that is “un-Islamic” from the world.

Afghanistan lies on the edge of what is known as the Fertile Crescent, an area in the Middle East that birthed the earliest civilizations. It is also called the “Cradle of Civilization.”

This region boasts some of the world’s oldest artefacts and heritage sites dating back to at least 5,000 years ago.

Afghanistan was a crossroad that connected Central Asia to East Asia, which is why the country shares some of the most prized and outstanding evidence of high culture and civilization from thousands of years ago.

Many of these treasures were destroyed by the Taliban, including 2,750 ancient works of art found nowhere else in the world.

Among the most recent was the destruction of the Giant Buddhas of Bamiyan in 2008.

The twin Colossi dated back to the 7th century B.C. The Taliban fired grenade launchers into the statues and bombed the top of the mountain to erase the images from the mountainside.

Before and After Destruction: Giant Buddha of Bamiyan

Since 1992, the Taliban has looted and destroyed at least 70,000 treasures and artefacts at the National Museum of Afghanistan.

In 1998, they razed the Puli Khumri Library, which housed some of the oldest books in the world. At least 55,000 old manuscripts, scrolls, and books burned.