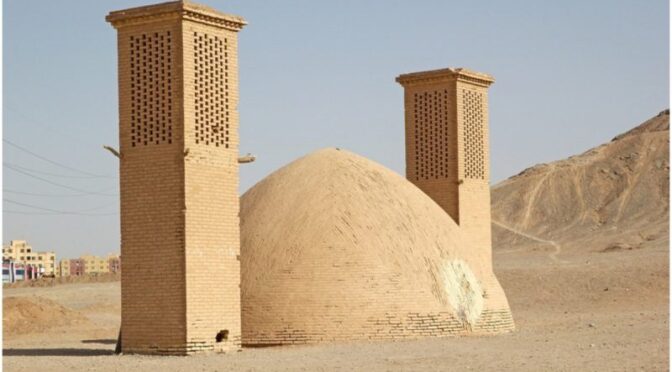 The Yakhchāl: 2,400-Year-old Persian “refrigerator” that stored food in the desert

The refrigerator is one of the most indispensable appliances of modern life. it’s almost unthinkable that a person can live with one or least have other means to keep their food refrigerated. so, imagine what if life was like during ancient times when electricity was still unheard of.

Ancients were wiser than some today belief. They had no rockets or electronics, no indisputable proof of such inventions was discovered, but they developed the technology that we don’t usually associate with the ancient world.

The yakhchal (meaning ice pit) was a type of ancient refrigerator built in the deserts of Persia (now Iran), which was made without electricity, modern coolants, or most elements of modern refrigerators. It demonstrates the ability of humans to find solutions to problems with any materials or technology they have available.

This approach to making refrigerators was mastered by Persian engineers around 400 B.C., though it is possible that people were making them before that.

Yakhchals are fairly simple to make so that even those who were relatively poor could afford them. Most yakhchals were domed structures with an underground square-shaped containment area.

After the containment area was dug and the dome was erected, a type of mortar made from clay, sand, ash, goat hair, and lime called sarooj was used to make it waterproof.

The collection area for the water needed to be deep enough to keep cool and the material out of which the yakhchal was made needed to be enough of an insulator to keep out heat.

Water was brought to the yakhchal either by directly transporting ice from nearby mountains or diverting water from an aqueduct into the yakhchal using underground water channels called qanats.

Adjacent to some yakhchals, an east-west oriented wall would be built on the south side of the refrigerator and water would be brought into the yakhchal from the north side of the wall. The reason for this was to keep the water cool during the middle of the day as it entered the yakhchal.

Another device used to keep the yakhchal cool is a badgir, a type of wind-catching mechanism which would catch the breeze and divert it down into the yakhchal.

As the air descended, it would be cooled by the ice as well as the cool air accompanying the water in the qanat. Alternatively, the badgir could be used to cause warm air to rise and cool air to replace it. This mechanism is still used in many desert towns in modern Iran.

Once in the yakhchal, the water would freeze overnight. This process could be expedited through having ice, transported from the mountains, already present in the yakhchal to act as a seed.

Once the water was frozen, it would be cut up into blocks so that the water could be easily transported out of the yakhchal for drinking and other purposes. In addition to storing drinking water, the yakhchal was also used to keep food such as fruit, dairy products, and probably meat cool so that it would last longer.

Many Yakhchals in Iran, Afghanistan, and other parts of west and central Asia are still standing even after thousands of years. They represent the remnants of ancient Persia and are a part of the cultural heritage of Iran.

In addition to being historically interesting, yakhchals have also been suggested as an inexpensive and sustainable way for modern Iranians and other central Asian communities to have refrigeration without requiring the use of electricity.

Theoretically, the process used to make yakhchals could also be replicated and used in other regions with climates similar to desert areas in Iran and Central Asia such as the American Southwest or parts of northwestern China. In this way, the revival of ancient technology could help modern people around the world live more sustainably and still have modern conveniences, specifically refrigeration.

Modern westerners tend to assume that conveniences like refrigeration require advanced technologies such as electricity and the ability to produce powerful coolant chemicals, but it turns out that refrigeration can be produced using surprisingly simple methods.