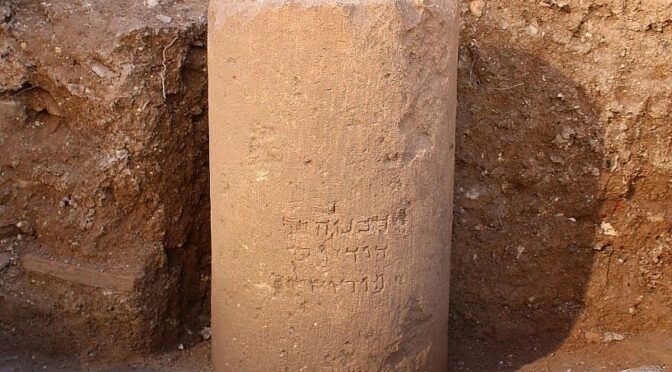 The Israel Museum unveiled a pillar from the 2nd Temple period bearing a 3-line inscription, the earliest stone inscription of the full modern Hebrew spelling of “Jerusalem.”

“Hananiah son of Dodalos of Yerushalayim [the way the ancient Jewish city is written in Hebrew today]” was discovered during a salvage excavation earlier this year of a large Hasmonean Period Jewish artisans’ village near what is today’s western entrance to the city.

In an interview with The Times of Israel, Israel Antiquities Authority archaeologist Danit Levi said when her team alerted her to the find.

She could not believe that the word “Yerushalayim” could be on an ancient pillar and that it must be graffiti.

When she saw the expertly chiseled Hebrew lettering in the 31.5-inch tall column, she dusted it off and began to read.“My heart started to pound, and I was sure everyone could hear it. My hands were trembling so badly I couldn’t properly take a picture,” she said.

Levi believes the column and inscription date back to 100 BCE, and belonged to or was built with money from Hananiah son of Dodalos—Dodalos being a nickname used at the time to refer to artists, based on the Greek myth of Daedalus.

Levi said the column was located in a Jewish village, but that it was found in a ceramic construction workshop used by the Tenth Roman Legion—the army that would eventually destroy Jerusalem and exile the Jews—evidently being reused in a plastered wall.

There is a disagreement among experts as to whether the word “Yerushalayim” was etched in Aramaic or Hebrew. While the bar is the Aramaic word for “son,” the Aramaic pronunciation of Jerusalem was “Yerushalem,” whereas the word in the inscription was written “Yerushalayim,” just like in Hebrew.

The artisan village was located near a natural source for clay, water, and fuel, along the main arter leading to the Temple, which, as noted by IAA’s Jerusalem Regional Archaeologist Dr. Yuval Baruch at the event, is still in use today as a roadway to the Old City.

The artisan village is situated on a massive 200-acre plot, likely in order to accommodate the needs of hundreds of thousands of pilgrims who would ascend to the Temple three times a year during festivals, as well as the 50,000 residents of the city at the time.

The column is currently on display at the Israel Museum in the Second Temple period exhibit.

Though this is the first inscription of its kind in stone, the full spelling of Jerusalem has been seen before, including on the Dead Sea Scrolls, which were written as early as 400 BCE.