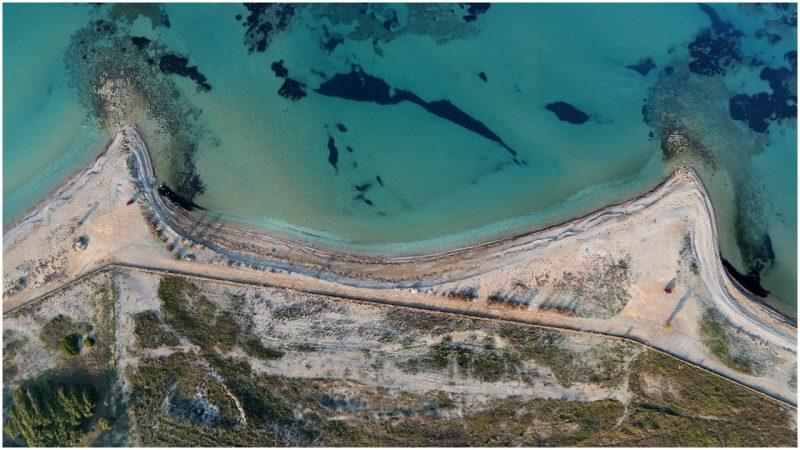 Some two millennia ago, Lechaion, one of the ports of the ancient city of Corinth, occupied a special place on the map of southern Greece.

It was a strategic point that easily connected to a number of significant trade routes that snaked through the Mediterranean and led to Italy, Turkey, and Tunisia, among other territories, helping Corinth to prosper.

For the past five years, archaeologists have been busy with underwater excavations to locate this lost ancient trade port, but it was not until 2017 that they came across some ground-breaking findings.

As a strategic center on the south coast of Greece, Corinth was initially diminished by the Romans in the 2nd century B.C. However, a century later, the Romans had gone after recolonizing Corinth, so the place was resurrected in 44 B.C. under none other than Julius Caesar himself (the same year of his death).

The famed ruler even named the colony after himself: Colonia Laus Iulia Corinthiensis.

The recent underwater surveying and exploration of the area have been conducted within the Lechaion Harbor Project, which commenced as early as 2013.

Activities have been led by both Danish and Greek researchers from the University of Copenhagen and Ephorate of Underwater Antiquities. Some of their findings feature remarkably preserved remains of the 1st century A.D. harbor, while a portion of the underwater artifacts dates to five centuries later.

The quest to locate the harbor has paid off in any case, revealing remarkable examples of ancient Roman engineering, included remnants of an island monument, which archaeologists believe served religious purposes, amid the restoration efforts of the entire Corinth.

“The mysterious inland monument in the middle of Harbor Basin 3–an area of the Inner Harbor–was dated to the early 1st century A.D. It was likely built as part of a Roman building program designed to help restore Corinth,” stated Bjørn Lovén from the University of Copenhagen, a co-director of the Lechaion Harbor Project.

It is the larger basin found in the outer parts of the harbor by Lovén’s team that was traced back to the 6th century A.D., while remnants identified in the inner parts of the port reveal clues that they belong to the 1st century.

There, they have also identified the foundation of what had probably once been a lighthouse. Lovén said: “We have excavated archaeological layers where almost everything is preserved.

Consider the pristine preservation of the roughly 2000-year-old-wooden post (see video) and imagine how well preserved wood and other organic materials that still lie at the bottom of this harbor.”

According to archaeologists, the wooden post likely fulfilled a function to support other structures, or perhaps it helped with the navigation of vessels within the harbor.

While stone blocks undoubtedly count as astounding examples of Roman engineering work, not the least striking seem to be the elements made of wood such as the wooden post itself. Typically, wood works would not endure such extensive periods of time underwater, but they would diminish.

There are other interesting findings, such as different types of seeds and bones. Though organic, these leftovers from the ancients have remained intact as they had stayed buried in deposits underwater.

A DNA analysis of these artifacts, still to be conducted within the framework of the research project, will enable researchers to tap into a sea of information regarding life in this coastal part of Greece.

In the words of archaeologists, such DNA tests will make for an “attempt to reconstruct the past environment genetically.”It will allow them access to data about life in different eras of antiquity, including the days of the ancient Romans, and they will even get to see what kind of flora and fauna thrived in the regions 2,000 years ago.

As archaeologists explain, analyzing wooden elements in the labs will potentially reveal many more details about the construction efforts of the Romans than what can be retrieved as data from stone remnants.

Lovén commented in this context, “I was joking that I would rather find a wooden spoon than a statue, and we did find archaeological layers where almost everything is preserved.”More findings from the underwater surveying include leftovers of everyday life in the ancient port, including pieces of pottery that give additional clues about the trade conducted between Corinth and other ancient seaside cities across the Mediterranean.

The underwater explorations have taken place in areas that are not at significant sea depths, but also areas that still count as quite active when it comes to the marine environment.

Researchers continually had to deal with relentless waves that would quickly bury with sediment their freshly made excavation trenches. However, they have used drone surveying, one of the few methods that have helped them in tracing terrain changes in the coast area quickly.

The use of such techniques has helped them locate the new harbor basin. As much as Lechaion flourished in many aspects, its glory did not last for very long.

A severe earthquake hit the area soon after it was restored under Caesar, destroying almost everything on the coast and lifting the surrounding area around Lechaion by over three feet.