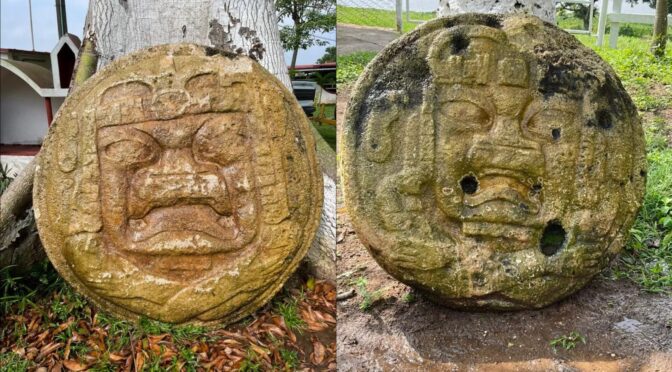 The twin pieces were found in Tenosique, a town located in the state of Tabasco, near Mexico’s southern tip, and are believed to feature rulers from the ancient Olmec civilization, whose name comes from the Aztec (Nahuatl) word “Ōlmēcatl,” which means “rubber people.”

The Olmec reigned between 1200 B.C. to 400 B.C. and are considered the first elaborate pre-Hispanic civilization in Mesoamerica(opens in new tab). Today, they’re best known for their sculptures of colossal heads.

The two carved monuments portray the faces of local rulers with their “grumpy mouth[s]” agape and their arms crossed, according to a translated statement. Each piece is punctuated by footprints, a diadem, corncobs, an Olmec cross and glyphs of jaguars, with the leaders’ open mouths alluding to the “roar of the jaguar.”

Researchers from the Ministry of Culture of the Government of Mexico, part of the Mexican National Institute of Anthropology and History (INAH) Tabasco Center, the organization that recovered the pieces, noted that what’s most striking about the reliefs is the positioning of the figures’ mouths, since they’re carved as though they’re “ajaw.” This signals to archaeologists that the portraits, which date to between 900 B.C and 400 B.C., were that of important figureheads within the Olmec community.

It’s possible that this style of Olmec carving evolved into the later Maya ajaw altars, according to the INAH statement. “The word ‘ajaw’ means ‘he who shouts,’ ‘he who sends’ [and] ‘the one who orders,’ and in these [later] Maya monuments the mouth stands out, a feature that must come from Olmec times, especially from these reliefs circulars of ‘contortionists’ that are portraits of local chiefs,” Carlos Arturo Giordano Sánchez, the director of the INAH Tabasco Center, said in the statement. Some of the Maya ajaw altars are found at the Caracol Maya archaeological site in Belize, “which tells us about the permanence of this theme for more than three centuries,” Giordano Sánchez said.

The newfound carvings look strikingly similar to five different reliefs of contortionists attributed to the Olmec that were found elsewhere in the region, including in Balancán and Villahermosa, two other cities in Tabasco; Ejido Emiliano Zapata, a town in the Mexican state of Jalisco; and in Tenosique.

Based on those similarities, the researchers believe that the portraits depict rulers performing ritual contortion. This practice involves “adopting a stance that reduces the flow of blood and oxygen to the brain to achieve a trance-like state,” Heritage Daily(opens in new tab) reported.

Doing so allegedly “gave them powers,” Tomás Pérez Suárez, an archaeologist at the Center for Mayan Studies at the National Autonomous University of Mexico (UNAM), said in the translated statement.

He also said that he believes that the newfound reliefs originated from the Middle Usumacinta region bordered by the Chacamax River to the north and the mouth of the San Pedro River to the south.

The INAH first learned about the reliefs in 2019 after an anonymous tip reported their discovery on a property in Tabasco’s capital.

The sculptures will be housed at the Pomoná Site Museum in Tenosique, which counts the aforementioned Ejido Emiliano Zapata piece as part of its collection.