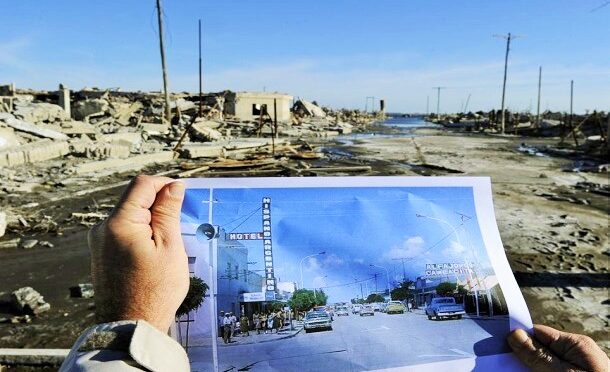 Villa Epecuen: The Town That Was Submerged For 25 Years

The landscape has the permanent look of winter. Leafless trees jag skywards while shimmering white dust covers the ground. The streets are deserted; the only sound is the breeze. Welcome to Epecuen, Argentina’s ghost town, with a population of just one.

Located 340 miles south-west of Buenos Aires, Epecuen was once a booming tourist destination on the shores of a salt lake famed for its healing properties. Then one-day disaster struck. On 10 November 1985, after a period of heavy rain, the banks of the lake burst. The town, stretching back for more than 100 blocks, was submerged in water 10 meters deep.

Over the past few years, the waters have receded and the town has re-emerged. Left behind is a crystalline residue that from a distance looks like snow, as well as hundreds of dead trees and a derelict resort.

When the flood hit, residents were forced to pack their bags and leave. No one dared to return, except for 83-year-old Pablo Novak, who now has the dubious title of being contemporary Epecuen’s only resident. Today he’s out for a jaunt on his rusting bicycle with his two dogs in tow.

“I got used to life on my own,” he says. “I decided to stay because I spent my youth here, I went to school here and also started a family here. So it seemed quite normal.”

The flood reduced Epecuen to rubble. No house was left untouched. Façades have disintegrated; walls have crumbled; pavements have sunk. Wooden staircases are exposed – in one spot are the rusting remains of a 1930s Chevrolet that an owner failed to salvage.

The salt has preserved tiny details, freezing the resort in time and allowing a voyeuristic glimpse into the past. Near the main street are the remains of a pizzeria. The sculptures that the owner bought to decorate his business are still intact, including a stone crescent moon sitting outside as though it were still 1985. In the rubble, a wood-fired pizza oven is clearly visible.

Walking among the crystalline ruins, the tracks left by a tractor that tried to salvage valuables from the long-gone Santa Teresista Church are still there. Dotted around the site, too, are green wine bottles half-buried in the sand. Further away from the main drag is what used to function as the municipal camping area. The eerie site has an abandoned playground: the frame of a set of swings still stands, as does a rusting seesaw, every inch reminiscent of Chernobyl.

Javier Andres, head of tourism for the normally sleepy agricultural region of Adolfo Alsina, has been swamped with interest in the last few weeks due to a concerted effort to promote the ruins. Epecuen has been compared to Pompeii, he says, but there is one major difference.

“We don’t think there’s anywhere in the world quite like it,” he explains. “Although it’s been called the Argentinian Pompeii, there you’re not able to walk around with a former resident explaining everything to you. Here you can do that.”

The waters began their retreat in 2009 but the tourist board delayed launching a campaign until now, respectful of the reactions the floods continue to provoke among the hundreds who lost their livelihoods.

“When you visit Epecuen, the sensation is hard to explain,” Mr. Andres says. “There’s a sense of wonder at this place that is completely in ruins, an apocalyptic vision. But then you can’t help thinking about the people that lost everything here, years of effort and hard work that disappeared overnight. So there’s a lot of sadness at the same time.”

The devastated landscape has attracted the attention of several movie crews and Roland Joffé’s Spanish Civil War drama, There Be Dragons, was partly filmed here. Yet the demise of Epecuen remains painful for former residents. The health resort was one of the most frequented in Argentina, growing in popularity from the 1920s and attracting European as well as local tourists at a time before the wide availability of alternative treatments.

The water – 10 times saltier than the sea – drew many of Buenos Aires’s Jewish community, nostalgic for the Dead Sea. The town’s population of just over 1,000 would swell fivefold during the high season.

“There are some things you can repair, such as the economic damage,” says Carlos Ruben Besagonill, 49, who used to run a hotel in Epecuen. “But you can’t replace the experiences, the affection, the moments you passed there.”

Mr. Besagonill says that it’s taken him more than 20 years to re-establish the business he had in Epecuen in nearby Carhue, now the region’s main tourist town. He was forced to leave behind everything in 1985, recently married and with a one-year-old daughter in his arms. “I used to dream every night that Epecuen reappeared,” he says. “I’d dream that I told my family: ‘Look we can go back and paint the hotel,’ because I really thought it was possible.”

Mr Besagonill is pleased that the ruins may soon be a major tourist attraction once more. For him, it should serve as a warning about “what not to do with nature”. He says that the province may be to blame for poor water management, but that the town should never have been built so close to the shores of a lake that was liable to overflow.

Back on the main street, the ghosts of Epecuen continue to swirl around the crumbling concrete as Mr. Novak recalls the ice-cream parlour he used to pass, the bar he’d visit for a beer, and the clubs where he’d dance until the early hours.

Mr. Novak says that his children don’t like coming back – unlike his 21 grandchildren who love hearing his yarns and devour his photos of the old days – and every year they try to convince him to move away. But while he remains independent, he argues, he’s going nowhere.

Although Mr. Andres rejects the idea that somebody may be prepared to stump up the “six-figure sum” needed to rebuild Epecuen, Mr. Novak remains dogged in his hope that the town will one day recapture its glorious past. “I always thought it would revive, that’s the thing I find most difficult,” he says wistfully. “I keep on hoping it will happen. But sadly no one seems to want to do anything.”