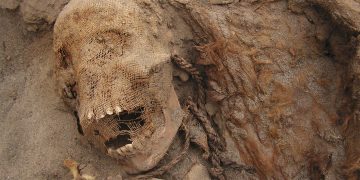 Why were hundreds of children sacrificed in ancient Peru?

Archeologists who found them must have been shocked, perplexed and saddened before they first found the children’s bodies. Why would someone ever kill hundreds of kids ritually? What kind of monster is capable of such incredible evil.

In Peru archeologists who have lately digged something out of a horror novel have stumbled upon, according to Al Jazeera:

“Archaeologists in Peru have discovered a grave containing the bodies of 227 children who were almost certainly killed as part of a child sacrifice ritual.

“The sacrificial site was found near Huanchaco, a beachside tourist town north of Lima.

“‘This is the biggest site where the remains of sacrificed children have been found.

The bodies of the children are believed to have been a part of the ancient Chimú culture are the date from a period between 1400 and 1450.

“From about 900 until 1470 AD, at which time they were conquered by the Inca empire. A scientific paper published in March in PLOS One details the results of recent excavations at the Huanchaquito-Las Llamas archaeological site, where ‘evidence of a previously unknown ritual involving a massive sacrifice of 140 children and 200 young camelids (llamas) by the Chimú State, c. AD 1450.’

The site, according to the Los Angeles Times, is one of the largest known cases of child sacrifice in the history of the Americas, and those who uncovered the bodies were said to be “shocked” unable to believe they had found so many tiny children who had been slaughtered in such a ritualistic fashion.

The Chimú people were highly advanced and valued agriculture because it helped feed their nation. They even build a network of hydraulic canals so they could bring water from the mountainous region down to irrigate their crops.

Yet none of these facts explain why the Chimú would have suddenly felt a need to sacrifice so many children. There are no written records of their specific religious beliefs, but we do know that the bodies were buried “in a thick layer of mud that lay on top of the sand” and this would seem to suggest they were placed there after heavy rains caused massive mudslides in the area.

Could the weather have been the reason for the sacrifices?

“The northern coast of Peru is very dry in general, but El Niño climate conditions can bring unexpected heavy rains and flooding.”

Haagen Klaus, an anthropologist at George Mason University, believes the floods were what caused the sudden need for human sacrifices, adding that “he had little doubt that the sacrifice was a response to the rains.”

It was believed that the ancestors controlled water supplies and offerings were made to appease the ancestors, ‘to bring the world back into balance.’”

Imagine what must have transpired: The rains and flooding came, destroying the crops and economy of the Chimú.

They felt a need to appease the gods, so they arranged for the ritual sacrifice of children and llamas, the most valuable things in their society.

Though it seems barbaric and unforgivable to us thousands of years later, the Chimú were merely doing what they hoped would revive their nation and return balance to nature and life.

But the evidence they left seems to suggest that all they accomplished was leaving a charnel house of horrors to document their own lack of understanding.