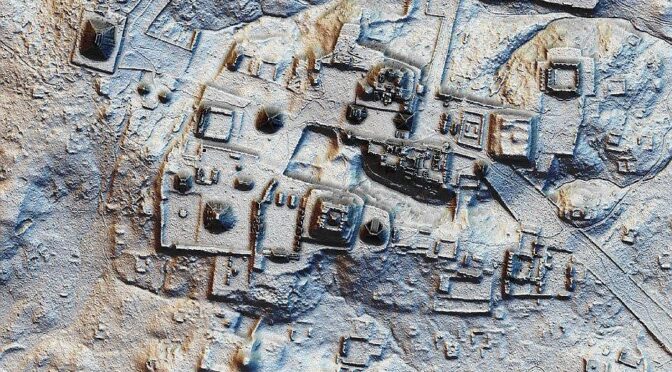 1,000-year-old ‘lost’ pyramid city in the heart of Mexico was as densely built as Manhattan

Archaeology might evoke thoughts of intrepid explorers and painstaking digging, but in fact, researchers say it is a high-tech laser mapping technique that is rewriting the textbooks at an unprecedented rate.

The approach, known as light detection and ranging scanning (lidar) involves directing a rapid succession of laser pulses at the ground from an aircraft. The time and wavelength of the pulses reflected by the surface are combined with GPS and other data to produce a precise, three-dimensional map of the landscape. Crucially, the technique probes beneath foliage – useful for areas where vegetation is dense.

Earlier this month researchers revealed it had been used to discover an ancient Mayan city within the dense jungles of Guatemala, while it has also helped archaeologists to map the city of Caracol – another Mayan metropolis.

Now, researchers have used the technique to reveal the full extent of an ancient city in western Mexico, about a half an hour’s drive from Morelia, built by rivals to the Aztecs.

“To think that this massive city existed in the heartland of Mexico for all this time and nobody knew it was there is kind of amazing,” said Chris Fisher, an archaeologist at Colorado State University who is presenting the latest findings from the study at the conference of the American Association for the Advancement of Science in Austin.

While less well known than the Aztecs, the Purépecha were a major civilisation in central Mexico in the early 16th century, before Europeans arrived and wreaked havoc through war and disease. Purépecha cities included an imperial capital called Tzintzuntzan that lies on the edge of Lake Pátzcuaro in western Mexico, an area in which modern Purépecha communities still live.

Using lidar, researchers have found that the recently-discovered city, known as Angamuco, was more than double the size of Tzintzuntzan – although probably not as densely populated – extending over 26 km2 of ground that was covered by a lava flow thousands of years ago.

The team also found that Angamuco has an unusual layout. Monuments such as pyramids and open plazas are largely concentrated in eight zones around the city’s edges, rather being located in one large city centre. According to Fisher, more than 100,000 people are thought to have lived in Angamuco in its heyday between about 1000AD to 1350AD. “[Its size] would make it the biggest city that we know of right now in western Mexico during this period,” said Fisher.

First found by researchers in 2007, archaeologists initially attempted to explore Angamuco using a traditional “boots on the ground” approach, resulting in the discovery of about 1,500 architectural features over each square kilometre surveyed. But the team soon realised the rugged terrain meant it would take at least a decade to map the whole area.

Instead, since 2011 the lidar technique has been used to map a 35km2 area, revealing an astonishing array of features at high resolution, from pyramids and temples to road systems, garden areas for growing food and even ball courts.

So far more than 7,000 architectural features over a 4km2 area seen using lidar have been verified by the team on the ground, with excavations undertaken at seven locations to shed further light on the site.

The earliest evidence from the city, including ceramic fragments and radiocarbon dating of remnants from offerings, dates to about 900AD, with the city believed to have undergone two waves of development and one of collapse before the arrival of the Spanish.

Fisher adds that lidar is likely to lead to further developments. “Everywhere you point the lidar instrument you find new stuff, and that is because we know so little about the archaeological universe in the Americas right now,” he said. “Right now every textbook has to be rewritten, and two years from now[they’re] going to have to be rewritten again.”

Fisher has also used lidar to explore a remote area of the Mosquitia region of north-eastern Honduras, shedding light on what is now known as the City of the Jaguar. This settlement, the team found, had terraces, water control features such as canals, and boasted about 10 plaza complexes, with the whole city stretching over three square kilometres.

“Many of these areas of the Americas that we see today that we think that we would classify as pristine tropical forests are really abandoned gardens,” says Fisher.

However, previous coverage of the work has proved controversial, with some saying claims of a “lost city” smack of colonialist rhetoric. Elizabeth Graham, professor of mesoamerican archaeology at University College London who was not involved in the projects, said the team’s work was impressive, and that lidar was backing up long-held suspicions about the size of archaeological settlements.

“Once it shows all traces of the land surface, we can interpret those, because you can tell what is natural and what is not,” she added. “It’ll show you terracing, where houses are – or at least structures of some sort – agricultural features, manipulated land – all of that.”

But, she said, while lidar can help to direct expeditions and digs, traditional techniques were still needed to unearth the details. “Ultimately we still have to get on the ground and then excavate,” she said.