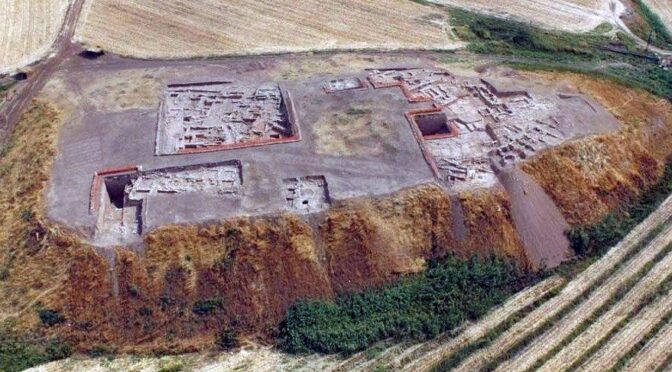 In the Kurdistan province of northern Iraq, an ancient town called ‘Idu’ was discovered. Hidden under a mound of 32 feet (10 meters), it is believed that the city was an entertainment center between 3,300 and 2,900 years ago.

King inscriptions made for walls, tablets, and plinths of the stone show that once it was full of lavish palaces. It is thought the inscription was made by the local kings celebrating the construction of the royal palace.

Archaeologists at the University of Leipzig in Germany spent the next few years excavating the area. They believe the city of Idu spent much of its time under the control of the Assyrian Empire about 3,300 years ago.

But archaeologists also found evidence that it was a fiercely independent city. Its people fought for and won, 140 years of independence before they were reconquered by the Assyrians.

They also found a cylinder seal dating back roughly 2,600 years depicting a man crouching before a griffon.

‘We were lucky to be one of the first teams to begin excavations in Iraq after the 2003 war,’ archaeologists Cinzia Pappi told MailOnline.

‘The discovery of ancient Idu at Satu Qala revealed a multicultural capital and a crossroad between northern and southern Iraq and between Iraq and Western Iran in the second and first millennia BC.

‘Particularly the discovery of a local dynasty of kings fills a gap in what scholars had previously thought of as a dark age in the history of ancient Iraq.

‘Together these results have helped to redraw the political and historical map of the development of the Assyrian Empire.’ The city was hidden beneath a mound, called a tell, which is currently home to a village called Satu Qala.

‘For wide-scale excavations to continue, at least some of these houses will have to be removed,’ said archaeologists Cinzia Pappi.

‘Unfortunately, until a settlement is reached between the villagers and the Kurdistan regional government, further work is currently not possible.’

Archaeologists plan to continue excavating the site once they reach an agreement. In the meantime, a study on the materials from the site, now stored in the Erbil Museum of Antiquities, has just been completed in co-operation with the University of Pennsylvania.

Together, the researchers will explore the surrounding area to determine the extent of the kingdom of Idu in its regional context. The findings have been reported in the journal Anatolica.