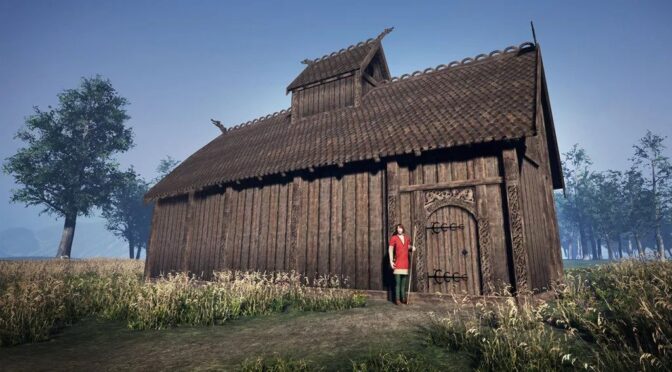 1,200-year-old pagan temple to Thor and Odin unearthed in Norway

The remains of the 1,200-year-old pagan temple were dug up in Norway and provide a rare insight into the Viking religion. Archaeologists have dated the remains of the large wooden building to the end of the 8th century.

They think it would have stood 40 feet high and was 45 feet long and 26 feet wide.

That’s just over half as tall as Buckingham Palace. It’s thought sacrifices and feasts would have occurred inside to honour the gods during the midsummer and midwinter solstices.

A large white penis shaped stone was previously found near the site and was linked to ancient fertility rituals. This is the first Old Norse temple to be found in Norway.

Old Norse is the ancient language associated with the Viking’s Archaeologist Søren Diinhoff of the University Museum of Bergen told Live Science: “This is the first time we’ve found one of these very special, very beautiful buildings.

He added: “It is a stronger expression of belief than all the small cult places.

“This is probably something to do with a certain class of the society, who built these as a real ideological show.”

The foundations of the ancient building, or “god house” as they’re often called, were unearthed last month in a Norwegian riverside village called Ose.

Digging was happening there in preparation for new houses. Traces of early agricultural settlements were also found nearby. They dated to the earlier time of around 2,000 to 2,500 years ago.

The remains of the temple date to a later time when the area is thought to have been dominated by elite wealthy families. It is thought the families would have led the cult worship.

Experts think the elite likely wanted a “god house” built based on more Christian structures with a high tower on top. Before this time, Viking gods were more commonly worshipped in simplistic settings.

The wood of the temple no longer remains but you can see the postholes where the main beams would have stood and the area where the tall tower would have been.

Evidence of cooking pits and animal bones fit in with the theory that feasts and sacrifices occurred there. Food, drink, animal sacrifices, and precious metals were often offered to Old Norse gods.

The worshippers would then feast and enjoy the goods themselves because they knew the gods couldn’t come and join them. Instead, wooden figurines may have been used to represent the gods.

Popular Old Norse gods include storm god Thor and war god Odin. Norway’s kings enforced Christianity from around the 11th century so burned down a lot of Old Norse temples and religious sites. There’s no current evidence to suggest the Ose temple was burned down.