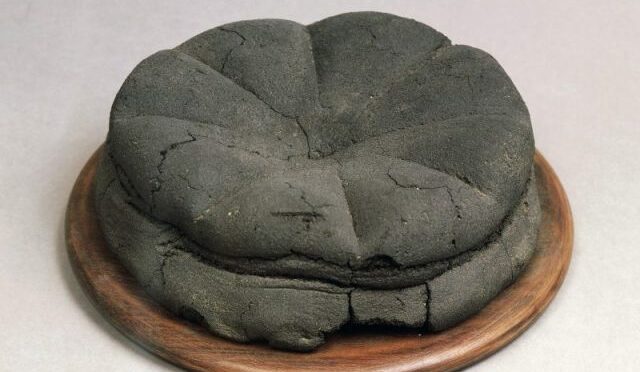 This is the ultimate piece of toast: a loaf of bread made in the first century AD, which was discovered at Pompeii, preserved for centuries in the volcanic ashes of Mount Vesuvius.

The markings visible on the top are made from a Roman bread stamp, which bakeries were required to use in order to mark the source of the loaves, and to prevent fraud.

I can’t get over how well it maintained its shape and texture, through both the volcano eruption and the ravages of time. It’s a very unsettling tribute to the normalcy of day-to-day life leading up to the catastrophic event: a (sort of) edible memento mori.

The ruins of Pompeii were first “discovered” in the late 16th century, even though the existence of an ancient city, hidden for centuries somewhere below the ground, was well known.

With the help of modern archaeology, the remains of more than 1,500 people were recovered, and with them numerous mundane objects, encompassing the daily life of a Roman town — frozen in time.

Herculaneum was engulfed by a fast-moving wave of hot mud, whereas Pompeii was buried by a hailstorm of ash and lumps of rock.

The volcanic material solidified into up to 50 feet of rock that preserved all kinds of objects such as furniture, family portraits, and mosaics. Because the rock kept out the air, organic materials including leather, wood, and foodstuffs were also saved from decay.

The most amazing human remains have been found at Pompeii. Unable to escape the destruction, it is thought that most of the residents were killed by the intense heat.

The petrified bodies decayed to leave hollow impressions in the rock. In around 1860, superintendent of the excavations, Giuseppe Fiorelli, poured wet plaster into the mysterious cavities his team was finding — revealing finely detailed molds of the ancient Pompeians.

One object among the thousands of interesting artifacts has received much attention from both the scientific community as well as the general public. Loaves of bread were found in an oven inside the ruins of a bakery, preserved in charcoal, covered in ancient ash, with their texture and shape looking like they just came out of the oven.

Each is marked with the baker’s stamp, which was used as a guarantee of quality and a mark of the bakery in which the loaf was made.

The baker’s oven with the bread was first discovered around 1880, and while the loaf has long since been part of museum exhibitions, the bakery remains one of the most popular tourist attractions in Pompeii today.

A portrait depicting the baker, Terentius Neo, and his wife was also found. What makes the portrait even more interesting is the way the wife is depicted — holding a writing plate, indicating that she was literate and standing with her husband as an equal, both in marriage and in business.

Food remains, among other things, were discovered in both cities, giving us a rare and exquisite insight into the diet of an average Roman citizen.

In 1930, archaeologists discovered another carbonized loaf of bread inside an oven in Herculaneum. The Roman bread exhibited at the National Archaeological Museum of Naples was later borrowed by the British Museum. For their 2013 live cinema event, “Pompeii Live from the British Museum,” London-based Italian chef Giorgio Locatelli was invited to recreate the 2000-year-old recipe.

“In AD 79, a baker put his loaf of bread into the oven. Nearly 2,000 years later it was found during excavations in Herculaneum. The British Museum asked Giorgio Locatelli to recreate the recipe as part of his culinary investigations for Pompeii Live,” explains the British Museum.

With recreating the ancient bread recipe, Locatelli and the British Museum offered a glimpse into something quite ordinary, yet it so fascinating to be able to understand how people ate their bread 2000 years ago.

The objects, the food, the furniture, and − above all − the plaster casts of the people, today serve as a tribute to a time long lost, when life was violently interrupted by the forces of nature and left to be rediscovered centuries later.