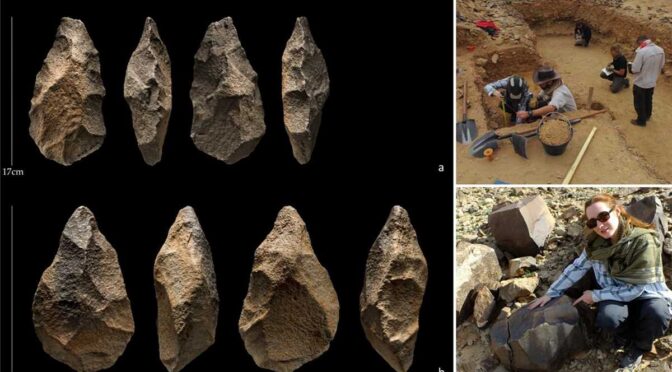 A team of Saudi scientists from the Heritage Authority recently discovered stone tools used by the inhabitants of Assyrian civilization in the Paleolithic time period that date back to 200,000 years.

While exploring the site near Shuaib Al-Adgham in the Al-Qassim area, the Heritage Authority found a range of Neolithic tools: iron knives, scrapers, axes, and stone pierce tools from the Middle Paleolithic period.

These are unique and rare stone axes that were characterized by the high precision in manufacturing that these human groups used in their daily life.

The abundance of stone tools discovered from this site indicated the numerical density of prehistoric communities that lived in this region.

It is also a clear indication that the climatic conditions in the Arabian Peninsula were very suitable for these human groups as they benefited from the natural resources available therein.

The satellite images showed that the Shuaib Al-Adgham and other sites were connected with passages of rivers to confirm that humans used rivers to reach deep into the interior regions of the Arabian Peninsula in ancient times.

According to the wide spatial distribution of the Assyrian sites, they were the largest concentrations of human inhabitance worldwide.

It also indicates that human groups in the Arabian Peninsula were able to cross through vast swathes of geographical distances, while the large number of sites centered around ancient valleys and rivers indicated that these groups were gradually spreading and discovering new sites when they needed them.

These sites were characterized by the spread of broken stone fragments and manufactured tools.

The authority stated that a huge amount of new environmental and cultural information has been collected, and the results showed that there were significant changes in the environments, ranging from very arid to humid.

The current evidence strongly supports the assertions of the existence of the “Green Arabian Peninsula” many times in the past.

During the wet phases of human civilizations, there were rivers and lakes throughout the Arabian Peninsula, which led to the spread and expansion of these human groups.

This confirms that the Arabian Peninsula was a major crossroads between Africa and the rest of Asia throughout prehistoric times and that it was one of the places of settlement in the period of the Stone Ages.

It is believed that the ancient migrations of these human groups were through two main passages — the Bab Al-Mandab Strait and the Sinai Peninsula Corridor.