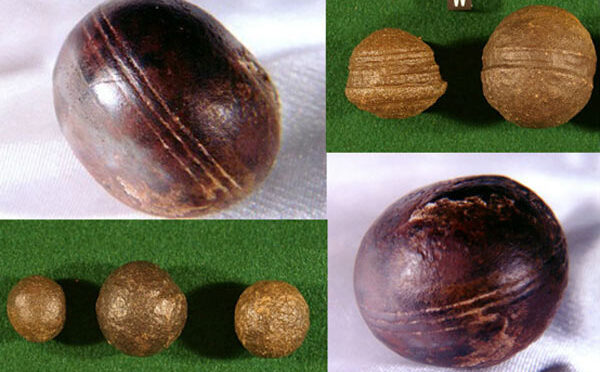 3-Billion-Year-Old Spheres Found in South Africa: How Were They Made?

In the small town of Ottosdal, in central North West Province of South Africa, miners working in pyrophyllite mines have been digging up mysterious metal spheres known as Klerksdorp Spheres.

This dark reddish-brown, somewhat flattened spheres range in size from less than a centimetre to ten centimetres across, and some of them have three parallel grooves running around the equator.

The most striking examples have the uncanny appearance of being something manufactured.  But here is the kicker — these metallic objects have been dated to 3 billion years old, a time when the Earth was too young to host intelligent life capable of creating these spheres.

No wonder, these objects have attracted attention and speculation from not only the scientific community but various fringe groups including creationists and advocates of “ancient astronauts theory”.

Klerksdorp Spheres are often classified as “Out-of-Place Artifacts”, a term coined by an American naturalist and cryptozoologist to indicate objects of historical, archaeological, or paleontological interest found in a very unusual or seemingly impossible context that could challenge conventional historical chronology by being “too advanced” for the level of civilization that existed at the time.

These objects claim to provide evidences that suggest the presence of intelligent beings well before humans were supposed to exist. Klerksdorp Spheres, however, aren’t out-of-place. Neither they are mysterious.

These spheres are actually concretion formed by the precipitation of volcanic sediments, ash, or both after they accumulated 3 billion years ago. Concretions are often ovoid or spherical in shape because of which they are commonly mistaken to be dinosaur eggs, or extraterrestrial debris or human artefacts, in this case.

The latitudinal ridges and grooves exhibited by Klerksdorp Spheres are also natural and are known to occur in concretions found elsewhere on earth.

Many false claims have been made regarding these objects. An often-repeated claim is that testing by NASA found the spheres to be so precisely balanced that they could have only been made in zero-gravity.

Not only there is no record of NASA ever saying that the objects aren’t spherical at all as evident from these images.

Another claim is that the spheres are manufactured of a metal “harder than steel”, a statement which is rather meaningless as steel can vary in hardness depending on the type of alloy and treatment.