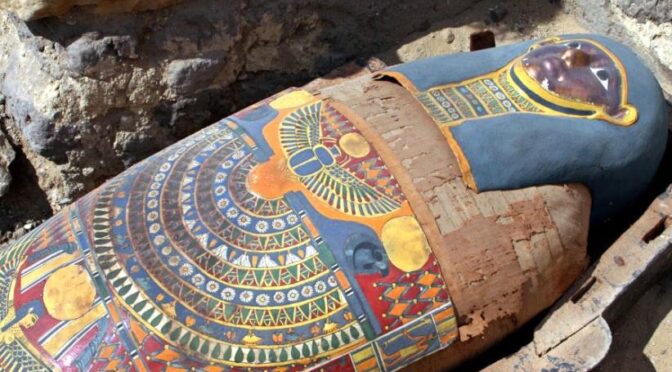 The recent medical inspection of the mummy in Egyptian led to a novel discovery believed to be one of, if not the earliest examples of a stroke in an Egyptian mummy.

Upon examination, a research team from the Spanish National Program for Scientific Research, Technology and Innovation concluded that the mummy,  a woman between 25 and 40 years of age who died about 2,700 years ago, suffered a right cerebral stroke.

The mummy was studied both macroscopically and radiographically.

The findings, published last month in World Neurosurgery, explain that the position of the female mummy’s shoulders, head, flexed arm and inward turning of the left foot indicate she endured a stroke on the right side of her brain.

The researchers also note that a stick or a crutch remained with her in the mummification process, which they speculate she used in life following the stroke.

The earliest example of a stroke

The researchers believe the woman lived with the aftermath of the stroke for several years. Strokes, which occur when blood supply to the brain is disrupted, are the second highest leading cause of death and disability globally.

The typical stroke patient today is at least 60 years old, decades older than the mummy is believed to have been.

In another study this month that analyzed the remains of a 2,000-year-old Egyptian mummy and found that she may have suffered from nasopharyngeal cancer, Polish researchers said that investigating mummy illnesses can significantly contribute to modern medicine.