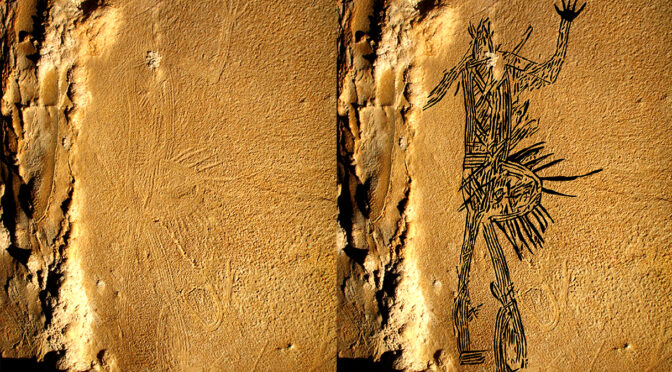 Deep in a damp cave in northern Alabama, archaeologists have made a giant discovery. On a subterranean ceiling just half a meter high, researchers have uncovered the largest cave art discovered in North America: intricate etchings of humanlike figures and a serpent, carved by Native Americans more than 1000 years ago.

Although the U.S. Southwest is famous for petroglyphs carved into canyons and cliff faces, much of the southeast’s rock art is hidden underground in caves. “Forty years ago, no one would have thought the southeast had much cave art,” says Thomas Pluckhahn, an archaeologist at the University of South Florida who wasn’t involved with the paper. But over the past few decades, archaeologists including the University of Tennessee, Knoxville’s Jan Simek have shown that’s not the case.

Simek first visited the 19th Unnamed Cave—called that in scientific papers so as to protect its precise location on private land—in the 1990s. In its cool, damp depths where no external light filters in, the flashlights of Simek and his colleagues revealed faint impressions on the ceiling depicting birds, snakes, wasps, and overlapping patterns of lines. The art resembled designs found on pottery in the southeast from the Woodland period, between 1000 B.C.E. and 1000 C.E.

The ceiling of the cave descends to just over half a meter high where the glyphs are located, so the researchers had to lie on their backs to see most of the images, Simek explains. There’s no place to stand and see the entire ceiling, he says.

To get a more complete picture of the art, Simek revisited the cave in 2017 with Stephen Alvarez, a photographer and founder of the nonprofit Ancient Art Archive, which documents ancient rock art around the world and shares it online via virtual reality. Alvarez wanted to use a new technique called 3D photogrammetry to create a realistic 3D model of the cave—and see whether they could uncover additional images that had gone unobserved in the tight space.

The researchers climbed down into the cave and used a tripod to start taking photos. Over a period of 2 months, they took nearly 16,000 overlappings, and high-resolution images. Next, they stitched the photos together, using computer software to align the images in 3D space; researchers could then manipulate the resulting model using virtual reality software, Alvarez explains. “We could light the space any way we wanted and drop the floor away” to virtually step back and see the entire ceiling, he says.

As the researchers manipulated their images to make the drawings more visible, five huge glyphs that were previously too large and faint to be seen came into relief. They included three humanlike beings dressed in regal garments, a swirling figure with a rattlesnake like tail, and a long serpent with scales.

The images measure between 0.93 meters and 3.37 meters long, making the biggest of them the largest cave art in North America, the researchers report today in Antiquity.

The images, likely made by etching into fresh mud on the damp ceiling, are undated. Charcoal fragments and wood smoke streaks on the cave walls, perhaps from the artists’ torches, date to the first millennium.

The Woodland Native Americans who lived in the area at that time resided in village settlements, built large earthen mounds for religious worship, and traded extensively across the south, east, and midwest. Their descendants remained in the region for centuries; but by the late 1800s, many had been forced west under the fledgling U.S. government’s policies of Native American removal.

The newly described figures share characteristics with other rock art formations in the southeast, like cliff drawings at Alabama’s Painted Bluff, and also in the Southwest, like the humanlike pictographs in Canyonlands National Park.

The figures are also similar to those found on Woodland-style pottery. Though the exact meaning of the glyphs is unclear, caves like the one in which they were found were often linked to the underworld, the researchers say.

While completing the work, the authors consulted with the Eastern Band of Cherokee Indians, whose tribal homeland includes the area where the cave is located.

Creating the glyphs required “an extraordinary degree of artistic skill” says UAF George Sabo. But much about the artists remains a mystery. “Who were they in their communities?” he wonders.

Though the cave’s location is undisclosed to protect the art from vandals, the team created a video from its model so anyone can explore it virtually. Klehm is excited to see 3D photogrammetry continue to reveal hidden art at other sites—and make it accessible. “[This] can help us see things that we can’t see, to go beyond what the human eye is used to looking for,” she says.