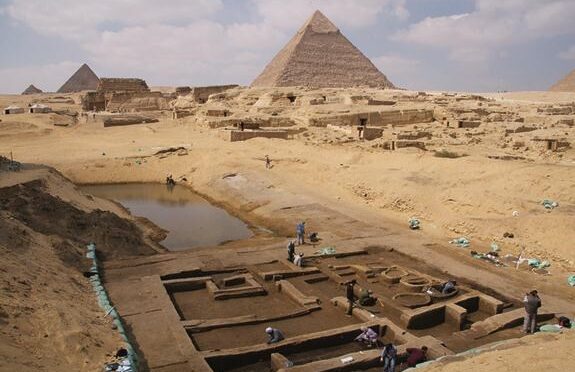 Archaeologists believe a tomb recently excavated at an ancient cemetery in Egypt would have boasted a pyramid 7 metres (23 feet) high at its entrance.

Found on the site of Abydos, the tomb dates back some 3,300 years. A team of archaeologists discovered a finely carved sandstone sarcophagus, painted red inside one of its vaulted burial chambers, which was created for a scribe named Horemheb. The sarcophagus has images of several Egyptian gods on it and hieroglyphic inscriptions recording spells from the Book of the Dead that helped one enter the afterlife.

There is no mummy in the sarcophagus, and the tomb was ransacked at least twice in antiquity. Human remains survived the ransacking, however. Archaeologists found disarticulated skeletal remains from three to four men, 10 to 12 women and at least two children in the tomb.

The chambers that the archaeologists uncovered would have originally resided beneath the surface, leaving only the steep-sided pyramid visible.

“Originally, all you probably would have seen would have been the pyramid and maybe a little wall around the structure just to enclose everything,” said Kevin Cahail, a doctoral student at the University of Pennsylvania, who led excavations at the tomb.

The pyramid itself “probably would have had a small mortuary chapel inside of it that may have held a statue or a stela giving the names and titles of the individuals buried underneath,” Cahail told Live Science, all that remains of the pyramid are the thick walls of the tomb entranceway that would have formed the base of the pyramid. The other parts of the pyramid either haven’t survived or have not yet been found.

It was not uncommon, at this time, for tombs of elite individuals to contain small pyramids, Cahail said. The tomb was excavated in the summer and winter field seasons and Cahail will be presenting results at the annual meeting of the American Research Center in Egypt, to be held in Portland.

Cahail believes that Horemheb’s family had military ties that allowed them to afford such an elaborate tomb. Another burial chamber, this one missing a sarcophagus, contains shabti figurines that were crafted to do the work of the deceased in the afterlife. Writing on the figurines say that they are for the “Overseer of the Stable, Ramesu (also spelled Ramesses).” This appears to be a military title and it’s possible that Ramesu was the father or older brother of Horemheb, Cahail said.

He noted it’s interesting that both Horemheb and Ramesu share names with two military leaders, who lived at the same time they did. Both of these leaders would become pharaohs.

“They could actually be emulating their names on these very powerful individuals that eventually became pharaoh, or they could have just been names that were common at the time,” Cahail said.

The bones the team discovered in the tomb indicate that considerably more women than men were buried in the tomb. This brings up the question of whether Horemheb and Ramesu had multiple wives at the same time. Cahail said that polygamy was a common practice among the pharaohs, but it’s uncertain if it was practised among non-royalty.

Radiocarbon tests, which can provide a date range for the bones, may be done in the future to help solve the mystery.

“You’re left with the question, who are all these people?” Cahail said.

One of the most interesting artefacts the team found was a heart amulet, made of red and green jasper. The hard stone amulet was broken into three pieces.

“It’s a beautiful object and possibly one of the best-carved examples of these very rare type of amulets,” Cahail said. “It was probably on the chest of one of the deceased individuals and there probably would have been some sort of necklaces and gold and things like that.”

The purpose of this heart-shaped amulet was probably related to spells from the Book of the Dead that tell the heart of the deceased not to lie. The ancient Egyptians believed that, after death, their hearts would be put on a scale and weighed against a feather representing ma’at, an Egyptian concept that includes truth and justice. If their heart weighed the same or less they could obtain eternal life, but if it weighed more they were destroyed.

“Essentially, your heart and your good deeds and everything that you’ve done in your life are weighed against the measure of truth,” Cahail said.