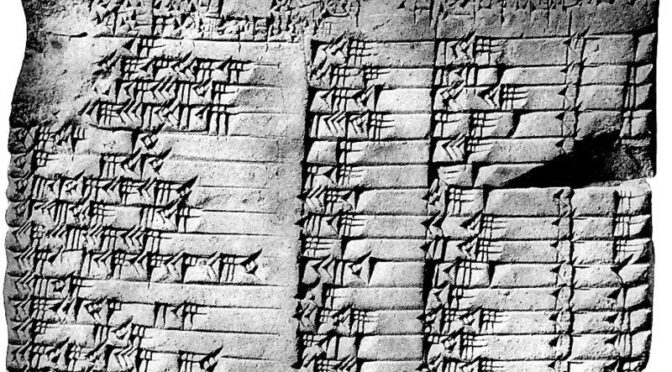 3,700-year-old Babylonian tablet rewrites the history of maths – and shows the Greeks did not develop trigonometry

Tucked away in a seemingly forgotten corner of the Istanbul Archaeology Museum, Daniel Mansfield found what may solve one of ancient math’s biggest questions. First exhumed in 1894 from what is now Baghdad, the circular tablet — broken at the centre with small perpendicular indentations across it — was feared lost to antiquity. But in 2018, a photo of the tablet showed up in Mansfield’s inbox.

Mansfield, a senior lecturer of mathematics at the University of New South Wales Sydney, had suspected the tablet was real. He came across records of its excavation and began the hunt. Word got around about what he was looking for, and then the email came. He knew what he had to do: travel to Turkey and examine it at the museum.

Hidden within this tablet is not only the oldest known display of applied geometry but a new ancient understanding of triangles. It could rewrite what we know about the history of mathematics, Mansfield argues. These findings were published Wednesday in the journal Foundations of Science.

It’s generally thought that trigonometry — a subset of geometry and what’s displayed on the tablet in a crude sense — was developed by ancient Greeks like the philosopher Pythagoras. However, analysis of the tablet suggests it was created 1,000 years before Pythagoras was born. Babylonian mathematics, which already holds a place of renown in the pantheon of ancient math, might’ve been more sophisticated than historians have given it credit for.

WHAT YOU SHOULD KNOW FIRST — Mansfield is no stranger to a pair of white gloves and following his mathematical curiosity. Years before discovering this latest tablet, dubbed Si.427, Mansfield was hot on the trail of another ancient Babylonian “document:” Plimpton 322. While the location of this artefact was known (it’s located at Columbia University) its true purpose was not.

Like Si.427, which dates back to roughly 1900 to 1600 BCE, Plimpton 322 is covered in geometric markings — riddles academics have tried to decipher for years. While the reigning theory was that these markings were a kind of teacher’s cheat code for Babylonian homework problems, Mansfield and colleagues were not convinced. In a 2017 paper, Mansfield and colleagues propose Plimpton 322 might be a kind of proto-trigonometry table of values — suggesting it predates the development of trigonometry as we know it today.

“A modern analogy would be to say that it contains a mix of elementary school problems alongside the unsolved conjectures of mathematics,” writes Mansfield in the new paper.

WHAT’S NEW — Now, Mansfield argues the discovery of Si.427 could confirm his Plimpton 322 hunch. In essence, Si.427 is argued to be a case study of how this proto-trig could be used in practice.

Si.427 is what’s known as a cadastral document. These are used to document the boundaries of land ownership. There are other examples on record, but Mansfield argues this tablet is the oldest known example from the Old Babylonian period — a range that stretches from 1900 BCE to 1600 BCE. On the tablet are legal and geometry details about a field that was split after some of it were sold.

“It’s a discovery that has come to us far outside our mathematical culture,” Mansfield says. “It seems new and fresh to us, even though it’s almost 4,000 years old.”

WHY IT MATTERS — While these tablets are the kind of thing you might easily walk past on display in a museum, Mansfield said this discovery could actually have a huge implication for how we understand these ancient mathematics. Namely, it means mathematicians were working with so-called Pythagorean triples (trios of numbers that satisfy the infamous a^2+b^2 = c^2 equation) long before Pythagoras himself was even born. It also helps answer a slightly less academic question: How do you evenly divide up disputed land?

“This is from a period where land is starting to become private — people started thinking about the land in terms of ‘my land and your land,’ wanting to establish a proper boundary to have positive neighbourly relationships,” Mansfield explains in a statement.

“And this is what this tablet immediately says. It’s a field being split, and new boundaries are made.”

HOW DOES IT WORK? — As for how triangles sketched in clay translate to farmer’s fields, it all comes down to perpendicular lines. Essentially, surveyors would choose two Pythagorean triples (which were inherently right triangles) and extend the boundary line of the resultant rectangle by eye to create true perpendicular lines that spread across the entire field.

“This proves that our Babylonian surveyor had a solid theoretical understanding of the geometry of rectangles and right triangles and used it to solve practical problems,” Mansfield says in the video.

There are also instances of resizing these triangles to better fit the physical shape of the field at hand, which surveyors would’ve liked done by referencing a table of trig values like Plimpton 322, the study suggests. This table would’ve been a comprehensive list of Pythagorean triples and the steps to resizing them.

WHAT’S NEXT — This discovery may have laid to rest one ancient math mystery, there’s still plenty more where that came from, Mansfield says.

He’s not “just talking about how mathematics students want their exams to be.” The advantage of a simple approach is its quickness — and Mansfield wants to examine whether or not this approach has any real-world applications.

“This approach might be of benefit in computer graphics or any application where speed is more important than precision,” he says.

Abstract: Plimpton 322 is one of the most sophisticated and interesting mathematical objects from antiquity. It is often regarded as teacher’s list of school problems, however new analysis suggests that it relates to a particular geometric problem in contemporary surveying.