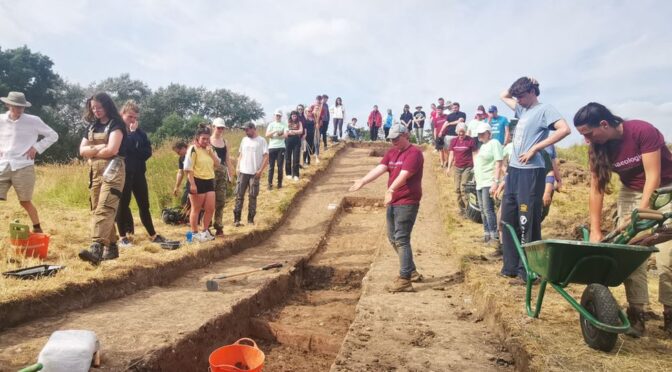 Archaeologists have discovered the ruins of a castle that they believe dates from the 13th century. They’ve been working on a mound of land in Wem, Shropshire, that belongs to Soulton Hall, an Elizabethan mansion.

The hall was built in the 16th Century, but experts believe the castle remains could date back as far as 1250. Site manager Nat Jackson, of Dig Ventures, said the find was “just amazing”.

“We found what we think might possibly be a castle on the mound.

“We’ve got a substantial wall and substantial blocks of wood dating to about the 13th to 15th century. It’s very, very, exciting,” he told BBC Radio Shropshire.

A test dig on the previously untouched mound was carried out in 2019, but teams returned in July to continue excavation work. Tim Ashton, the landowner, said his family have been curious about the lumps in the land for over 100 years.

“We’ve always had questions, my grandfather was born in the 1920s and always wondered what it was,” he said.

“The team is fairly comfortable in the time because of the objects we’ve been finding.

“The finds are all from that period, a pilgrims badge, ceramics, and ampulla which is a medieval way of carrying holy water and it was not made for a great deal of time.

“The moat bridge is colossal and we can be confident of the dating on that,” he said.

Mr Jackson added: “We think it was quite a small one, dominating the road to Wem and there would have been a moat around it.

“We think we might have found the evidence of the bridge that went over the moat, but this is for further exploration next.”

Dig Ventures has been working with Cardiff University students in their field school.

Mr Ashton said for many of the students, have never met in person since beginning their course due to the pandemic, but others, could not graduate from their course without the field experience.

“They have had very little access to the field, some of them couldn’t graduate until they came to the dig, we’ve been planning it for eight months.

“It’s one of the first teaching digs [taken place since the pandemic] and they essentially found a perfectly preserved timber structure.”