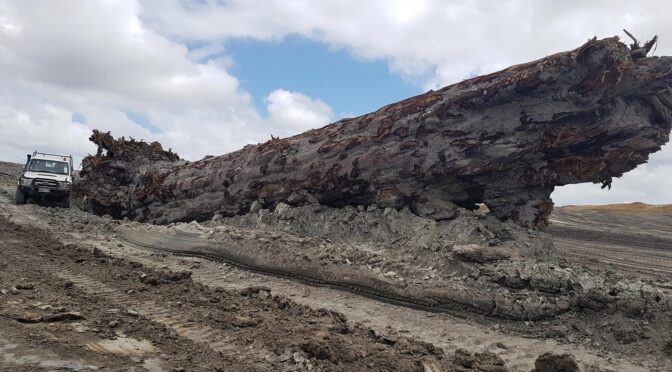 Humans today take Earth’s magnetic North Pole for granted. But over the course of the planet’s history, the direction of its magnetic field has shifted. A new study suggests that the last time the field flipped around and flopped back again, the effects on Earth’s surface were cataclysmic, Carolyn Gramling reports for Science News.

The study, published on February 19 in the journal Science, makes use of massive, fossilized Kauri trees from New Zealand to create a timeline of how cosmic rays impacted Earth’s atmosphere during their lifetimes, which overlapped with a magnetic field flipping event called the Laschamps excursion.

By comparing the chemicals preserved in the tree rings to atmospheric records found in ice cores and soil, the researchers drew conclusions about the magnetic field’s effect on the ozone layer, as well as solar activity and space weather.

After that, the researchers laid out a series of theories about how the changes may have impacted ancient people and wildlife on Earth. The Science study is the first to consider a wide swath of possible consequences.

The study begins with fossilized Kauri trees that died over 41,000 years ago. One, which was discovered last January and delivered to Ngāwhā Marae, was the first tree found to have lived during the entirety of the Laschamps excursion, an 800-year period when the magnetic field flipped backwards and corrected itself again.

The research team analyzed levels of a radioactive form of carbon in the trees’ rings. The idea is that when Earth’s magnetic field is weak, cosmic radiation causes more radioactive carbon to form in the atmosphere, so it shows up in higher amounts in the tree rings.

Because tree rings form with a predictable yearly pattern, they could match magnetic field strength with time. They found that during the Laschamps excursion, the magnetic field was about 28 per cent of its usual strength and even weaker in the centuries leading up to this time period.

From about 41,600 to 42,300 years ago, Earth’s magnetic field was only six per cent of its full strength. Because this period centres on about 42,000 years ago, the researchers named the period the Adams Event after Douglas Adams, author of Hitchhiker’s Guide to the Galaxy, which states that 42 is the answer to “the ultimate question of life, the universe and everything.”

It would be bad enough if just Earth’s magnetic field was weakened, but ice core data showed an unfortunate coincidence: during the Adams Event, the sun was also in a period of lowered activity. While that might have meant fewer solar flares, it also means that the protective shield the sun creates against cosmic rays—called the heliosphere—was also weakened.

With both its magnetic field and heliosphere diminished, Earth was doubly at risk from cosmic radiation, according to the study.

That would be really bad news today, given space weather’s effect on satellites and the power grid. But what would it mean for life 42,000 years ago?

“It must have seemed like the end of days,” says University of New South Wales geoscientist Chris S.M. Turney, a co-author of the new study, to Alanna Mitchell at the New York Times.

The effects may have included a thinning ozone layer, the aurora borealis approaching close to the equator, an increase in ultraviolet radiation reaching the surface, raging electrical storms, and Arctic air reaching across continents, the authors write on the Conversation.

They link the environmental effects to the extinction of large animals in Australia, the eventual demise of Neanderthals and humans’ use of red ocher pigment for cave art and sunscreen.

“One of the strengths of the paper just from the perspective of its scholarly work, not necessarily the analytical science that it does, is just the degree to which it stitches together all of these disparate sources of information to make its case,” says climate scientist Jason E. Smerdon of Columbia University to the New York Times.

The paper has sparked conversations among scientists about the theories it presents, and how future research might provide evidence to back them up or not, John Timmer reports for Ars Technica.

Experts have wondered for over 50 years about whether or not magnetic field shifts affect life on Earth, but lacked clear avenues to find answers, geophysics expert James E. T. Channell tells the Times.

“The biggest value of the paper is that it’s putting out several ideas that should be investigated further,” says GFZ German Research Centre for Geosciences geomagnetism Monika Korte to Science News.