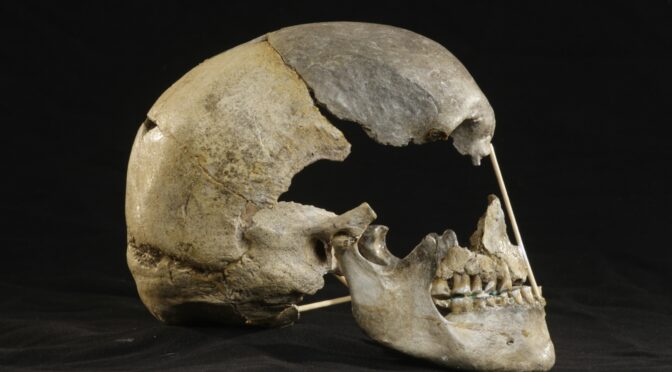 In the heart of the limestone region of Bohemian Karst in the Czech Republic stands the steep frontal walls of the Koněprusy Caves, within which researchers found the “golden horse” — what they claim are the remains of the earliest modern human in all of Europe.

The genome sequence from a skull found in the cave system is over 45,000 years old, which is roughly around the time modern humans migrated out of Africa and into Eurasia according to the study’s authors who published their findings Tuesday in Nature Ecology & Evolution.

The subject specimen, named Zlatý kůň (golden horse in Czech) by researchers, belonged to a population of non-African people that lived during the last glacial period whose ancestors no longer exist in the present day.

Zlatý kůň has long been the subject of scrutiny and also of at least one mix-up, thanks to a cow.

Zlatý kůň is a largely complete skull that was found with other skeletal remains in 1950 inside the cave system that is the present-day Czech Republic.

Previous observers thought that Zlatý kůň was at least 30,000 years old. Now, other ancient artefacts have been traced back to around the time when the first modern humans settled in Europe and Asia more than 40,000 years ago, according to the study’s authors.

There was “Ust’-Ishim, a Siberian individual who showed no genetic continuity to later Eurasians” and who’s DNA was around 45,000 years old, the study notes.

Zlatý kůň was thought to be an ancient specimen, but radiocarbon dating showed results that dated to as recent as 15,000 years ago. But if Zlatý kůň could tell her own story she would have said that wasn’t the full picture.

“We found evidence of cow DNA contamination in the analyzed bone, which suggests that a bovine-based glue used in the past to consolidate the skull was returning radiocarbon dates younger than the fossil’s true age,” Cosimo Posth, co-lead author of the study, said in a statement.

Simply put, another researcher at a previous date used animal glue to hold together Zlatý kůň’s skull. But it wasn’t the animal DNA that intrigued researchers at the Max Planck Institute for the Science of Human History.

Kay Prüfer, the study co-author from the Max Planck Institute for Evolutionary Anthropology, said Zlatý kůň lived closer to the time when Neanderthals were interbreeding with modern humans.

Prüfer said in an email that Zlatý kůň does not belong to any present-day groups. One theory is Zlatý kůň’s group was wiped out by another catastrophic event.

“We speculate that a large volcanic eruption that happened in Italy (about) 39,000 years ago may have contributed to their and the European Neandertals demise,” said Prüfer.

The volcanic eruption would have drastically changed the climate in the northern hemisphere and made it extremely difficult to survive in large swaths of Ice Age Europe.

“It is quite intriguing that the earliest modern humans in Europe ultimately didn’t succeed,” study lead author Johannes Krause and director at the Max Planck Institute for Evolutionary Anthropology said in a statement.

Zlatý kůň’s own demise is unclear. Researchers found hyena chew marks on her skull and then there was the cow mix-up, but DNA tests show that she beat out Ust’-Ishim by a few hundred years to be one of the oldest modern humans in Europe, according to the study’s authors.