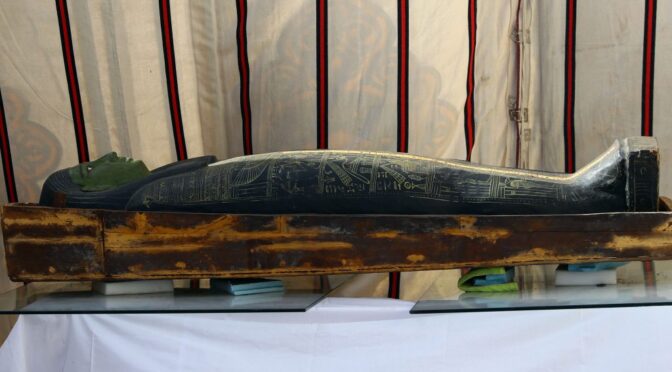 Egypt recently unearthed a funerary temple and the oldest coffins ever discovered in Saqqara, revealing more mysteries in the ancient burial ground and marking another significant find in the vast necropolis south of Cairo.

The country said a mission headed by prominent Egyptologist Zahi Hawass, the former minister of state for antiquities affairs, unearthed the funerary temple of Queen Nearit, the wife of King Teti — the first pharaoh of the Sixth Dynasty of Egypt.

The mission also unearthed 52 burial shafts with more than 50 wooden coffins found inside. They date back 3,000 years, the oldest sarcophagi found in Saqqara.

“These coffins are wooden and anthropoid … many of the gods that were worshiped during this period were represented on the surface of the coffins, in addition to various excerpts from the Book of the Dead that help the deceased pass through the journey of the other world,” the Ministry of Tourism & Antiquities said in a statement.

In recent months, Egypt unearthed hundreds of coffins of top officials and priests in Saqqara, all dating back to the more recent Late and Ptolemaic periods.

The new discovery is distinguished because older New Kingdom sarcophagi were found, the ministry has said. The New Kingdom period lasted from the 16th century BC to the 11th century BC, covering the 18th, 19th, and 20th Egyptian dynasties.

“The discovery confirmed that the Saqqara area was not used for burial during the Late Period only, but also during the New Kingdom,” the statement read.

Another “luxurious, mud-brick shrine” was also uncovered at a depth of 24 meters below the ground level, the deepest shaft found yet. Hawass said digging work will continue until the burial chamber is discovered.

“Inside the shafts, the mission discovered large numbers of archaeological artifacts and a large number of statues that represent deities such as the god Osiris and Ptah-Soker-Osiris,” the antiquities ministry added.

Egypt has carried out extensive digging operations in Saqqara in recent years, which resulted in a string of discoveries, including the unearthing of a 4,400-year-old tomb of royal priest Wahtye in 2018 and the discovery of hundreds of mummified animals and statues a year later.

Tourism & Antiquities Minister Khaled El-Enany said in November that Egypt can “find tombs and burial shafts in every single spot in this area,” referring to Saqqara, which is also home to 13 pyramids.

Egypt is hoping the findings can help revive the vital tourism industry, which took a fresh blow because of the COVID-19 pandemic just when it had begun to recover from the aftermath of uprisings and civil unrest in 2011 and 2013.

Hawass said the latest discoveries in the ancient necropolis will “make Saqqara an important tourist and cultural destination.”

“It will also rewrite the history of Saqqara during the New Kingdom,” he added.