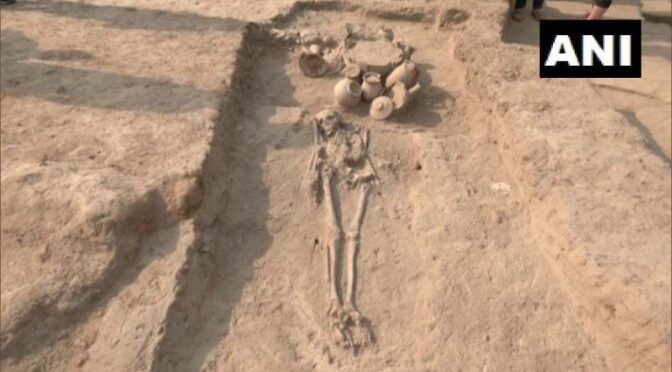 Rakhigarhi in Haryana is world-famous for some of the most well-known sites Harrapan civilisation, and the Archaeological Survey of India (ASI) has been conducting new excavations for the last 32 years. Now, it seems ASI has made one of its biggest discoveries in the 7,000-year-old planned Harappan city with the excavation of a 5000-year-old factory which used to manufacture jewellery.

The excavation and study at Rakhigarhi have so far revealed that this place once not only housed a planned Harappan city with some of the best engineering marvels of the time but also engaged in trading and business practices.

The archaeologists found evidence of town planning, including streets, pucca walls and multi-storeyed houses. Evidence of modern engineering which is currently being used to build big cities– like straight streets, drains, and dustbins placed at corners of streets for garbage– were also found from the excavation site in Rakhigarhi.

During the latest round of excavation in Rakhigarhi, which is scheduled to be completed by the end of May, skeletons of two women were found along with jewellery. Along with skeletons, utensils used by the deceased were also found.

Elaborating on the latest discoveries, Sanjay K Manjul, Joint Director General, ASI told news agency ANI that Rakhigarhi archaeological site has seven mounds and pieces of evidence of Harappan culture have been uncovered in all seven of them. “Similar excavations have happened before and this is the third phase,” he said.

Sharing his observations on the engineering marvels of the Harappan civilisation, the archaeologist said well-led planning could be observed here, with streets and walls along with it, house complexes, drainage systems, burnt brick structural support and varieties of pottery components with many paintings showing their improved baking technique.

“Copper and gold objects were also found, along with artefacts, beads, sealed scripts with motifs, and ceilings with Harappan script and elephant depictions. This shows their cultural diversity. Our motive is to develop this site iconically,” he added.

History of Rakhigarhi: In Points

How ASI plans to develop Rakhigarhi In Future

According to a report by news agency IANS, there is a procedure going on for a memorandum of understanding between the ASI and Haryana government under which the ancient things of the Rakhigarhi will be displayed in a museum which is under the Haryana government.

The ASI will soon start excavation in September 2022 and after that will throw open these mounds, so that the tourists can get full information. Very soon Rakhigarhi will witness a beeline of tourists as the officials want that when the tourists see the remains they get the information about the antique and the truth about it.

As per the announcement made by the Central government in the Union Budget 2020-21, Rakhigarhi will be developed as one of the five best iconic places for which excavation started on February 24, 2022.

The government’s aim is to facilitate the tourists who come to Rakhigarhi besides exposing structural remains. Besides, its aim is also to understand the settlement of Harappa in Rakhigarhi and the interrelation of seven mounds.