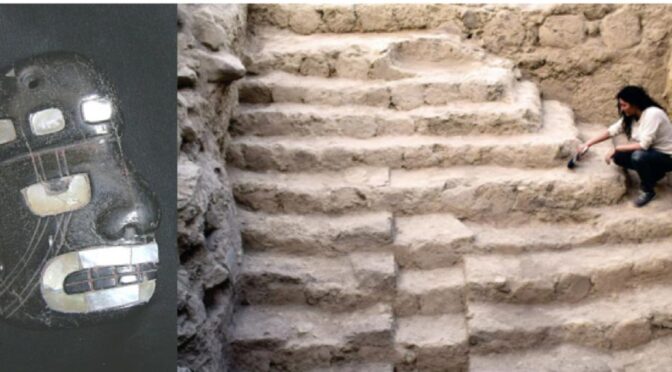 In Peru, archaeologists have uncovered a mysterious pyramid structure in a massive archaeological complex. The pyramid may have been used for ceremonial purposes and could even have been the site of human sacrifices. It is hoped that this discovery will help researchers to better understand one of the first Andean civilizations.

The amazing discovery was made at the Sechin Archaeological Project, in the northern province of Casma in the Ancash region. This historic site dates back over 5000 years and it is believed to have been the centre of an enigmatic prehistoric society known as the Sechin culture.

Little is known about this culture, but it constructed some of the first monumental buildings in the Americas. Many experts believe that it even may be the first known civilization in the Andes.

Staff and experts from the Sechin Archaeological Project had been excavating the site when they made the discovery. The structure was buried deep in the ground. A team of specialists and workers had to dig 18 feet (5.49 meters) of earth and move large stones to uncover the pyramidical construction.

This structure consists of a series of steps that are made out of slabs and stones and are similar to a step-pyramid. It is an estimated 10 feet (3.05 meters) high and 15 feet (4.57 meters) wide.

The pyramid is believed to be approximately 5000 years old and is in good condition.

According to Archaeology News Network, ‘the pyramid is located within the south-central part of the main building’. This massive structure was once believed to be the seat of government for the Sechin culture.

The researcher’s initial assessment is that the pyramid was used for ritual and possibly religious purposes. Archaeologist Monica Suarez, the coordinator at the Archaeological Project, stated “It served a ceremonial purpose, but we need to make further analysis.” Many cultures in the ancient Andes used similar buildings for rites and sacrifices. Living and Traveling in Peru reports that stepped pyramids were ‘aimed at attaining higher or elevated levels of spirituality.’

Skulls and a Dismembered Skeleton

There were a number of grisly discoveries made near the pyramid. For example, the archaeologists uncovered two human skulls, which after a preliminary study were determined to have belonged to an adult and a young child. At the side of the structure, they found a skeleton that appears to have been dismembered. This is evidence that a person may have had his or her limbs cut off while still alive or post-mortem.

The discovery of the skulls and skeletons ‘makes the theory of ceremonial practices gain traction,’ reports Andina. It is also possible that human sacrifices took place on the stepped structure. There was a long tradition of human sacrifices in the Andes until the coming of the Spanish.

However, researchers at the archaeological park believe that it is also possible ‘that the stepped, pyramid-shaped structure served as a ladder to get to a higher level,’ according to Andina. The nature of the stepped structure and its location may mean that it was used to access the centre of the ancient site. It may have allowed the inhabitants of the massive complex to approach the central building.

The Peruvian Pyramid Provides Insights into a Mysterious Culture

Andina quotes Suarez as saying, “There is an adobe wall at the top, with fingerprints of Sechin inhabitants visible in the mud.” It appears that when the mud bricks were still wet the workers deliberately left impressions with their fingers. These fingerprints can be viewed as workers signing their work.

Work will continue on the pyramidical construction and the remains found in its vicinity will be thoroughly studied. The pyramid-like structure can provide more information on the Sechin complex. More importantly, if it is proven to have been a ceremonial site, it can help researchers to better understand the mysterious people who lived here 5000 years ago.