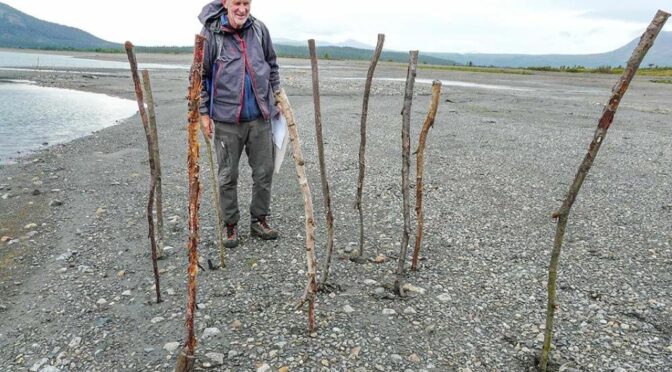 Reidar Marstein was out walking in Jotunheimen this summer in June, some 850 metres above sea level when he saw something strange at the bottom of the mountain lake Tesse in Lom municipality.

The water in the lake is drained every summer in order to produce power. Hobby-archaeologist Marstein immediately realised that the short wooden poles he saw sticking up in the low water formed a pattern.

“I saw that they were placed in a particular system,” Marstein says to the Norwegian national broadcaster NRK (link in Norwegian).

The system of wooden poles were in fact Stone Age fish traps, the Museum of Cultural History in Oslo writes in a press release (link in Norwegian).

One of the poles has recently been established to be 7,000 years old, meaning it is dated to 5,000 years BC. This is the early Stone Age in a Norwegian context.

“The find is unique evidence of an ancient fishing tradition in the mountains!” the Museum writes in the press release.

Together with freshwater biologist Trygve Hesthagen, Marstein managed to get a fair overview of the poles before the lake was again filled with water over the summer.

The fish trapping constructions in Tesse are among the oldest of this type from Northern Europe.

The wood is well preserved, and the archaeologists hope to get detailed information about the exact age of the fish traps, how many years they were in use, how often they were repaired and during which time of the year such repair work was carried out.

This piece of wood has been dated to be 7000 years old. (Photo: Reidar Marstein)

Previous excavations around lake Tesse have found remains from the Stone Age all the way back to 7,000 years BC. It would have largely been the reindeer that drew hunters and gatherers to these mountains.

Traces of the reindeer hunting have been found en masse by the glacial archaeologists in the Secrets of the Ice programme who secure finds that melt out of glaciers in the mountains. The more the ice melts, the older the items they find – from the Bronze Age and recently also from the Stone Age.

“There have however been great insecurities around whether or not Stone Age people came to the mountains just to hunt and gather, or if they indeed were also catching trout,” the press release reads.

Well, now we know. They were definitely catching some trout.

Excavations in 2013 and 2014 revealed extensive Stone Age activity on the shores of the mountain lake Tesse, including from the time when the fish traps would have been in active use. (Photo: Birgitte Bjørkli/KHM)

During the summer, lake Tesse has again been filled with water. The fish traps are now around 2-4 metres below the water surface. Divers from the Norwegian Maritime Museum have recently secured more samples and measurements from the poles, and also covered up some parts of the construction.

“Examinations of these wooden poles can give us knowledge about the Stone Age which we otherwise just dream of when excavating a Stone Age settlement,” the archaeologists write excitedly in the press release.

“In a Norwegian and Scandinavian context, this is a remarkable find. It’s a gift,” archaeologist Axel Mjærum from the Museum of Cultural History says to NRK.

A complete excavation is planned for spring next year.