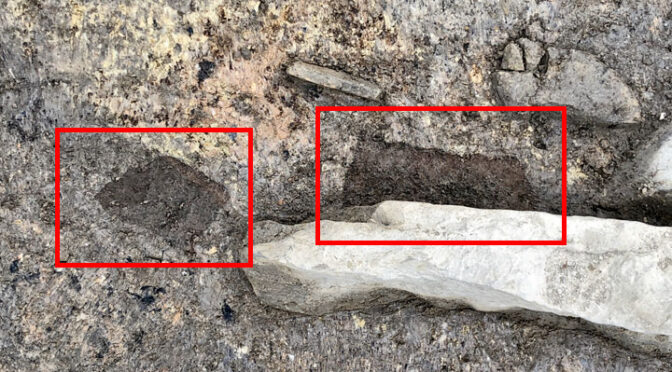 Over the years of excavation, the Ness has produced so many surprises that some archaeologists thought we had exhausted all the possibilities.

Today we have yet another “first” as of Jan and Jo, working in Structure Twelve, and in the area to the east of the southern hearth, found Neolithic wood!

To be precise, this astonishing new discovery is in the vicinity of robbed-out orthostats close to the grand eastern entrance, which regular readers will remember is flanked and made special by two large external orthostats.

The wood is contained in two post-holes, but these are unusual ones and quite different to the many small, roundish stake-holes in Structure Twelve’s floor – the most recent of which were discovered by Gianluca yesterday.

To the astonishment of Jan and Jo, the new post-holes are rectangular – indeed one is almost square – and at around 5 cm and 10cm wide, they are noticeably bigger than the stake-holes that represent cooking arrangements throughout the building.

Their unusual shape is likely to come from the way in which the wood was prepared, most probably being split radially and thus having a rectangular profile. Site director Nick thinks they may have been replacements for an orthostatic division that had provided a screen relating to the east entrance in the second phase of Structure Twelve’s life.

The wood is not in good condition, which is hardly surprising after thousands of years in the ground. It is, however, in a slight dip in the floor which may have allowed moisture to be present, thus preserving the material. As it is far too mushy to be lifted there are ongoing discussions as to the next move.

The aim is to recover it in a manner that might allow identification of the type of wood present. It might also be possible to see if the wooden stakes had been sharpened before being driven into the floor.

The post-holes could be half-sectioned, which might allow a view helping identification. Alternatively, micromorphological Jo may be able to insert one of her Kubiena tins (little open-ended square tins) to retrieve material.

We will let you know what happens.

Elsewhere in Structure Twelve, Sigurd is now planning his area of the north end and we have welcomed back Jenna and Andy Boyar, who has replaced Chris working outside the blocked north-west entrance.  We wish safe travels to Chris and his wife, Jenny, and look forward to seeing them again next year.

In Structure Ten, Travis has been transferred from Trench J to give him a change of scenery and some new challenges as he works towards his archaeology diploma.

He has taken over the area where Ellen was removing the last of the black deposit over the yellow clay floor in the northern recess. Travis will complete the task.

This was also Holly’s last day in Structure Ten, but we have no doubt that she will be back in the future. In Trench J, and as mentioned yesterday, Michaela has continued to remove dumps inside the blocked south-east entrance of Structure Five and this will put us in a position to remove more of the stone blocking.

Also in Trench J, but this time in Structure Thirty-Two, Ceiridwen and Ray are uncovering a large pottery spread. The pot appears to be fairly fragmented so they are progressing with the utmost care. It is unlikely that this pot will be lifted until next week, so we will let you know what happens.

Speaking of pot, Roy has been working on the early round-bottomed vessel from Structure Five, which we mentioned earlier in the week.

Much of the pot was covered in clinging, and rapidly hardening, midden material but careful cleaning has revealed several more sherds, all with the distinguishing striation marks on the exterior surface made by the potter’s finishing process.

In addition, the two main sherds can now be seen to join, as can three other sherds which seem to be from the pot rim.

More may yet be discovered and, once more, we will let you know.

We were visited today by a film crew from Caledonia Productions in Glasgow.

They are doing preparatory work for a full-scale documentary next year and interviewed Nick, Mark, Clare and Gianluca.