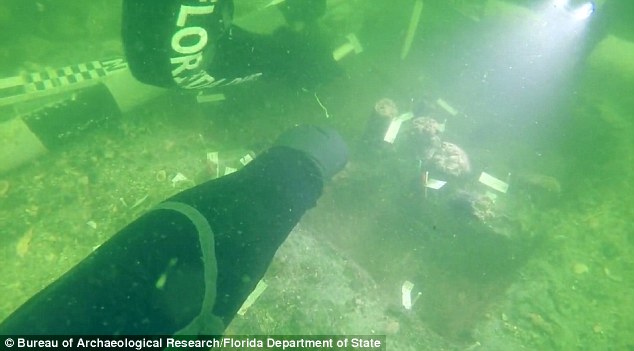 The site was discovered by an amateur diver who was looking for shark teeth but stumbled on an ancient jawbone.

Archeologist Ryan Duggins noticed a worn – down molar tooth attached to the jawbone in a picture sent from the diver. This suggested it belonged to a prehistoric person.

State officials in Florida called finding an “unprecedented discovery.” The site began to be investigated by Duggins and his team from the “Archaic Period” located 900 ft (275 m) from the shore.

The burial grounds are expected to cover about 32,000 sq feet (3,000 sq meters) off the coast of Manasota Key.

Seeing a 7,000-year-old site that is so well preserved in the Gulf of Mexico is awe-inspiring,”

In a Florida State Department press release, Mr. Duggins said, “We are truly humiliated by this experience.

“The site is believed to have been preserved in a freshwater pond thousands of years ago when water levels were 30ft (9m) lower, according to the press release.

The pond had a bottom covered in peat, which reportedly slowed the process of organic decay and allowed for the preservation of human remains.

“Our hope is that this discovery leads to more knowledge and a greater understanding of Florida’s early peoples,” said Florida Secretary of State Ken Detzner.

The state said they are working closely with Native American tribes to ensure the proper treatment of the bones.

“We are happy to be working, shoulder to shoulder, with the Bureau of Archaeological Research and the residents of Manasota Key to identify a preservation plan that will allow the ancestors to continue to rest peacefully and without human disturbance for the next 7,000 years”, the Seminole Tribe of Florida’s historic preservation officer Paul Backhouse told the Bradenton Herald newspaper.

“The highest priority of all involved is to honor tribal beliefs and customs with respect to this ancestral resting place,” said the Florida Department of State.

Florida archaeologists have discovered other evidence of the Archaic period but say this discovery is remarkable because the site survived offshore through hurricanes and erosion.