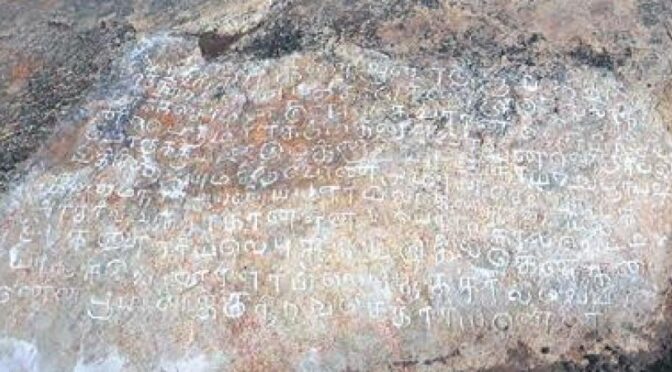 Archeologists have stumbled on a Chola period stone inscription at a lake bund in Mookanur village near Sankarapuram in Kallakurichi district in Tamil Nadu, India.

According to experts, King Vanenja Perumalana Vanakovarayan created the inscription about a canal and connecting lakes during Rajendra Cholan III regime in the Sagarai year 1182 (1260 AD).

“During his rule, a canal was built at the south side of Arni lake, and the canal was linked to a lake in Moorkanur.

Another canal, dug up at the south side of the lake in Moorkanur, was linked with a lake in Kaduvanur,” Villupuram Government Arts College History department professor T Ramesh says while explaining the inscription.

Moorkanur is now known as Mookanur, says S Rajagopal, another expert.  The archeology team which found the inscription consisted of professor Ramesh, his student Kumaraguru, Jothiprakash of Mundiyampakkam, and Mubarak of Villupuram.

The Chola dynasty was a Tamil thalassocratic empire of southern India, one of the longest-ruling dynasties in the world’s history. The earliest datable references to the Chola are in inscriptions from the 3rd century BCE left by Ashoka, of the Maurya Empire.

As one of the Three Crowned Kings of Tamilakam, along with the Chera and Pandya, the dynasty continued to govern over varying territory until the 13th century CE. Despite these ancient origins, the period when it is appropriate to speak of a “Chola Empire” only begins with the medieval Cholas in the mid-9th century CE.

The heartland of the Cholas was the fertile valley of the Kaveri River, but they ruled a significantly larger area at the height of their power from the later half of the 9th century till the beginning of the 13th century.

The whole country south of the Tungabhadra was united and held as one state for a period of three centuries and more between 907 and 1215 AD. Under Rajaraja Chola I and his successors Rajendra Chola I, Rajadhiraja Chola, Virarajendra Chola, and Kulothunga Chola I, the dynasty became a military, economic and cultural power in South Asia and South-East Asia.

The power of the new empire was proclaimed to the eastern world by the expedition to the Ganges which Rajendra Chola I undertook and by naval raids on cities of the city-state of Srivijaya, as well as by the repeated embassies to China. The Chola fleet represented the zenith of ancient Indian sea power.

During the period 1010–1153, the Chola territories stretched from the islands of the Maldives in the south to as far north as the banks of the Godavari River in Andhra Pradesh.

Rajaraja Chola conquered peninsular South India, annexed parts of which is now Sri Lanka, and occupied the islands of the Maldives. Rajendra Chola sent a victorious expedition to North India that touched the river Ganges and defeated the Pala ruler of Pataliputra, Mahipala.

He also successfully invaded the cities of Srivijaya of Malaysia and Indonesia. The Chola dynasty went into decline at the beginning of the 13th century with the rise of the Pandyan Dynasty, which ultimately caused their downfall.

The Chola kings were avid builders and envisioned the temples in their kingdoms not only as places of worship but also as centers of economic activity.

They were also well known for their art, specifically temple sculptures and ‘Chola bronzes’, exquisite bronze sculptures of Hindu deities built in a lost-wax process they pioneered; that continues (to a certain extent) to this day.

They established a centralized form of government and a disciplined bureaucracy. The Chola school of art spread to Southeast Asia and influenced the architecture and art of Southeast Asia.

The medieval Cholas are best known for the construction of the magnificent Brihadisvara temple at Thanjavur, commissioned by the most famous Chola king, Rajaraja Chola in 1010 CE.