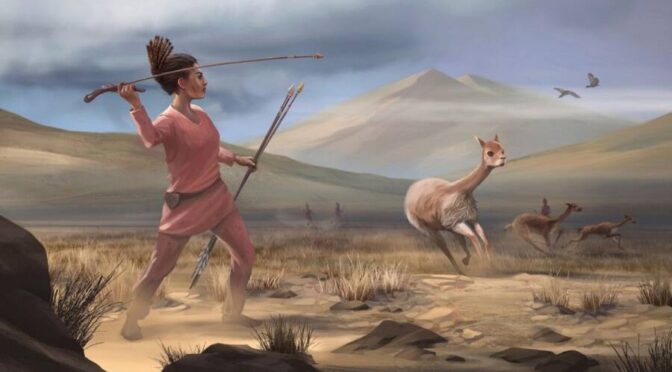 Nine-thousand-year-old human remains discovered at the Andean highland site of Wilamaya Patjxa in Peru appear to have belonged to a woman hunter buried with a toolkit of projectile points and animal processing implements, according to a report in Science Magazine.

They were fascinated by a tool kit with 20 stone projectile points and blades lined neatly by the person’s side at a burial pit high in the Andes. Both signs led to a high-status hunter’s discovery.  “Everybody was talking about how this was a great chief, a big man,” says archaeologist Randy Haas of the University of California (UC), Davis.

Then, the University of Arizona bioarchaeologist Jim Watson observed that the bones were slender and light.  “I think your hunter might be female,” he told Haas.

Now, the researchers report that the burial was indeed that of a female, challenging the long-standing “man the hunter” hypothesis. Her existence led them to reexamine reports of other ancient burials in the Americas, and they found 10 additional women buried with projectile points who may also have been hunters. “The message [of the new finding] is that women have always been able to hunt and have in fact hunted,” says archaeologist Bonnie Pitblado of the University of Oklahoma, Norman, who was not part of the study.

The “man the hunter hypothesis,” which prevailed after an influential symposium in Chicago in 1966, held that during the course of human evolution, men hunted and women gathered—and they seldom switched those gender roles.

Some researchers challenged the notion, and ancient female warriors have been found recently, but archaeological evidence of women hunting has been scant. And the idea that all hunters were male has been bolstered by studies of the few present-day groups of hunter-gatherers, such as the Hadza of Tanzania and San of southern Africa. In those cultures, men hunt large animals and women gather tubers, fruits, nuts, and seeds.

Haas and his team, including local Aymara colleagues, weren’t intending to study female hunters. They discovered the fossilized remains of six individuals in burial pits at the archaeological site of Wilamaya Patjxa at 3925 meters’ altitude on the windswept altiplano of southern Peru. Two people were buried with stone tools.

One person, likely 17 to 19 years old, was accompanied by four projectile points that would have been attached to short spears for hunting, several cutting blades, a possible knife, and scraper tools likely used for processing animal hides and meat.

The 20 stone tools and ochre, which can be used to tan hides, were neatly stacked next to the top of one individual’s thigh bone as if they had been held in a leather pouch that had disintegrated. Another person, likely 25 to 35 years old at death, was buried with two projectile points. The pits also held bone fragments of Andean deer and camelids, such as vicuña or guanaco.

The researchers figured out the sex of the bones using a new forensics method developed by co-author Glendon Parker of UC Davis. The technique analyzes whether an individual’s tooth enamel carries a male or female version of a protein called amelogenin.

The individual with the impressive toolkit was female; the other person with hunting tools was male. Studies of isotopes of carbon and nitrogen in the woman’s teeth showed she ate a typical hunter’s diet of animal meat and plants.

Others find the evidence of a female hunter convincing. “It’s a smoking gun,” says archaeologist Meg Conkey of UC Berkeley, who was not part of the study. “But skeptics might say it’s a one-off.”

Haas anticipated that concern: In a search of reports of burials at 107 other sites in the Americas older than 8,000 years, he found 10 other women and 16 men also buried with hunting tools. This meta-analysis suggests “early big-game hunting was likely gender-neutral,” he and his colleagues report today in Science Advances.

Robert Kelly of the University of Wyoming applauds the discovery of the female hunter but isn’t convinced by many of the other potential cases. He points out that having tools in the same grave as a person doesn’t always mean they used them in life. Two burials were female infants found with hunting implements, for example. Buried tools could also have been offerings from male hunters to express their sorrow, he says.

Pitblado says that even if not all of those female remains belonged to hunters, the meta-analysis suggests women have long been capable of hunting, and provides hints about where to look more closely for evidence.

Human ecologist Eugenia Gayo of the University of Chile agrees. Such research could help answer questions such as “What was the type of environments where everybody got involved in the hunting?” she says.

It shouldn’t be surprising that women could hunt, Pitblado adds. “These women were living high up in the Andes, at 13,000 feet full time,” she says. “If you can do that, surely you can bring down a deer.”