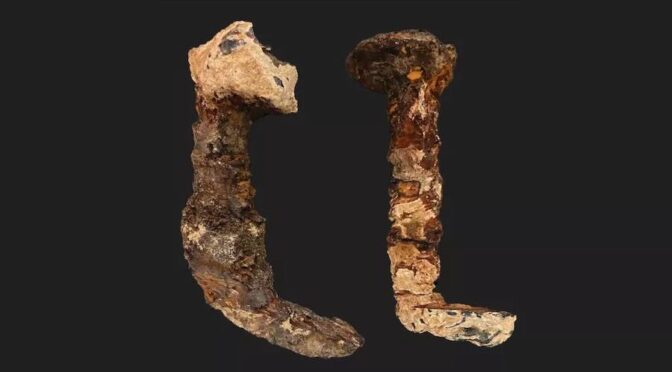 According to a new analysis, two corroded Roman-era iron nails which some have claimed pinned Jesus to the cross seem to have been used in an ancient crucifixion. The controversy about the origin of the nails was reignited by this study.

The latest research indicates that the nails of the tomb of the Jewish high priest Caiaphas, who supposedly handed Jesus over for execution to the Romans for execution. Slivers of wood and bone fragments suggest they may have been used in a crucifixion.

The connection to Caiaphas and the new evidence did not completely show that the nails were used to crucify Jesus in Jerusalem in A.D. 33, Geologist Aryeh Shimron, the lead author of the study published in the journal Archaeological Discovery.

“I certainly do not want to say that these nails are from the crucifixion of Jesus of Nazareth,” Shimron told Live Science. “But are they nails from a crucifixion? Very likely, yes.”

Where did the nails originate?

Israel Hershkovitz, a renowned anthropologist at Tel Aviv University, received the nails in an unmarked box from the collection of Nicu Haas, an Israeli anthropologist who died in 1986. According to the Israel Antiquities Authority (IAA), Haas obtained them from a tomb excavated in the 1970s, decades before the Caiaphas tomb was discovered, according to Haaretz.

But the IAA doesn’t know which tomb the nails came from, and no records of their provenance have ever been found. In a controversial 2011 documentary called “The Nails of the Cross,” however, filmmaker and journalist Simcha Jacobovici suggested the nails were those lost from the Caiaphas tomb — and that the high priest may have been so overcome with guilt about the crucifixion of Jesus that he kept the nails as a memento.

Haaretz reported that some scholars, though no names were given, have called the latest research highly speculative.  But Shimron, a geologist based in Jerusalem who’s retired from the Israel Geological Survey, said the new study gave weight to the documentary’s ideas. Shimron has not studied the two nails that are the subject of Jacobovici’s 2011 documentary before now, though he was involved in a 2015 study tied to another of Jacobovici’s controversial documentaries on the archaeology of Jesus.

Workers widening a road discovered the first-century “Caiaphas” tomb in 1990 in a neighbourhood in the southeast of Jerusalem. The tomb contained 12 ossuaries —– one marked with the name “Qayafa” and another, ornately decorated with motifs of flowers, marked with the Aramaic name “Yehosef Bar Qayafa,” or “Joseph son of Caiaphas” in English. Most archaeologists now accept that the tomb was used to bury the first-century high priest Caiaphas and his family, the study said.

Caiaphas, who is is mentioned several times in both the Christian New Testament and history of the Jews written in the late first century by Flavius Josephus, presided over a sham trial of Jesus for blasphemy, after which Jesus was handed over to the Roman governor Pontius Pilate for execution, according to the Gospel of Matthew. The execution was reportedly carried out on Friday, April 3, 33, when Jesus was nailed to the cross — a common Roman method of capital punishment.

In the latest study, Shimron and his co-authors compared samples from the two nails with sediments from the ossuaries in the Caiaphas tombstone chests used to hold the bones of people after they had decayed for about a year on a rock shelf. It found that not only did the physical and chemical signatures of the nails and the ossuaries match, but they also seemed to be unique.

For example, the ratios of isotopes of carbon and oxygen — variants of these elements — in both sets of samples suggested they both came from an abnormally humid environment, and they both had significant “flowstone deposits” —– layers of calcite carbonate formed by flowing water.

These findings match the conditions in the Caiaphas tomb, which is located near an ancient aqueduct and often would have been flooded by its overflow. The researchers also found evidence on both the nails and the ossuaries of a specific fungus — an unusual type of yeast — that grows only in very damp conditions and has been found in no other tomb in Jerusalem. “I think the nails came from that tomb,” Shimron said.

Their analysis of the nails with an electron microscope also found slivers of wood on the nails, which they recognized as cedar, and tiny fragments of bone —– unfortunately now fossilized. Those discoveries heightened the possibility that the nails came from crucifixion, but they did not prove it, Shimron said.

The IAA says their records show that two iron nails were also found in the Caiaphas tomb — one inside an unmarked ossuary and another on the ground near the ornate ossuary, possibly where it fell when it was disturbed by tomb robbers — but they were later lost.

The excavator of that tomb suggested they might have been used to scratch inscriptions on the ossuaries, but that idea was never investigated, Shimron said. The new study indicated the nails from Tel Aviv University were indeed those lost from the Caiaphas tomb, despite the IAA’s denial, he said.

According to the theory presented in Jacobovici’s documentary, they might have been buried with Caiaphas because crucifixion nails were thought to be magical — a belief noted in ancient Jewish writings. And because Caiaphas is only known for his role in the crucifixion of Jesus, it’s possible that the nails are linked with that event — although it can only be a supposition, Shimron said.

Hershkovitz, who still has possession of the two nails, told Live Science he was not convinced by the latest study, but he did not rule out the possibility that the nails came from the Caiaphas tomb. The nails are long enough to have been used on a person’s hands in a crucifixion, and they are bent upward at the end, — perhaps to prevent the hands being lifted off the cross, he said.

But the presence of bone fragments did not prove the nails were from a crucifixion, because bones from the tomb may have stuck to the nails. “Ossuaries are full of human bones,” he said.

Still, “there is a possibility — and we have to keep an open mind for every possibility, as scientists,” Hershkovitz said.